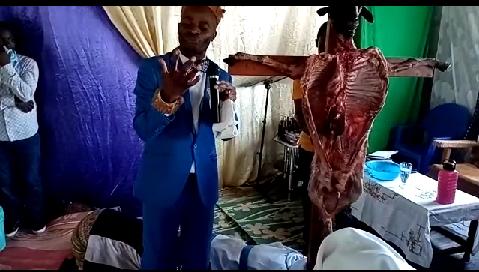 BLANTYRE-(MaraviPost)-Very Scaring! One of the country’s Pentecostal churches in Blantyre namely Living Fountain has been caught into Holly Communion of eating fresh goat meat and eating and blood drinking.

According to the video clip in our possession, shows the church leader identified as Pastor Mlotha leading church members eating fresh meat of the goat nailed on the cross.

While Mlotha eats the fresh goat meat, church members mostly women bow down before him in soul songs.

Our investigation reveals that the church operates in Blantyre at Mbayani Primary School’s new blocks for weekly services.

In an exclusive interview on Tuesday, March 16, 2021, with female church member who did not want to be named to avoid reprisal, told The Maravi Post that the blood drinking Holly Communion happens monthly during church services.

She confirmed being initiated by eating fresh goat meat and drinking blood for cleansing as a symbol of Holy Communion.

“My life changed since I joined this church and having blood drinking as Holy Communion. Drinking blood it’s not by force to drink blood in the church but those have faith that their challenges will be addressed.

“It symbolizes the Holy Communion as other churches say. The goat is the symbol of a sheep in the bible. So, drink the blood plus eating the meat of the son of God (Jesus),” she justifies.

She added, “Every member is supposed to do it but those with little faith did not do it. We do that monthly We meet at Mbayani Primary School’s new blocks on Sundays for church service but sometimes we meet at our pastor’s house.

“To those who don’t have faith they take as satanic people. Most people that attend the church service their lives change for better. The pastor is gifted when it comes to pray for people and things happen”.

The Maravi Post’s reporters will attend the next Sunday service to appreciate the blood drinking Holly communion.