You are here: Home » Lifestyle » Sri Lanka attacks: Christians pray at home one week after bombings 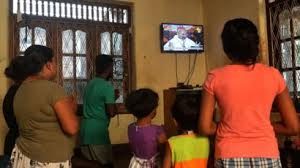 Christians in Sri Lanka have prayed at home one week after a series of deadly bombings by Islamist militants.

He called the attacks “an insult to humanity” in the service, broadcast from a chapel in his residence.

Sunday church services were cancelled after the attacks on Easter Sunday which killed at least 250 people.

“Today during this mass we are paying attention to last Sunday’s tragedy and we try to understand it,” Cardinal Ranjith said.

“We pray that in this country there will be peace and co-existence and understanding each other without division.”

While Sri Lanka’s churches were empty, scores of people gathered for a public service outside St Anthony’s Shrine in Colombo – the site of one of the deadliest bombings.

There, Buddhist monks joined Catholic priests for prayers in a show of solidarity with the Christian community.

Like it? Share it!
Shocking!!!Nollywood actor, Dammy Eke dies after slumping at a bar in Rivers State < Previous
MCP President Chakwera articulates colossal plans for Malawi at Njamba Park Next >
Latest News From Malawi
Headlines From: The Maravi Post