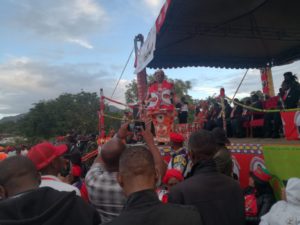 Huge announcements by President of Malawi Congress Party (MCP) on Sunday at Njamba Freedom Park in Blantyre had met the docile ears of mammoth crowds that swarmed like bees to the historical ground of patriotic gatherings.

The MCP leader shared the vision of him as the next Malawi’s State President facilitating the  construction of Freedom Park National Stadium at this historical ground and also an International Convention Centre at the nearby Kwacha that will hold the capacity of 6000 people.

The Hi-5 Champion who strongly opposes to the discriminatory quarter system selection of students into the public institutions of higher learning, further shared the vision of embarking on the university expansion project that will see doubling or tripling the student’s intake.

He further shared plans of constructing 200 secondary schools across the country.

To the youth of Malawi, Chakwera hinted on establishing the National Youth Service.

Other speakers during the function was People’s Party (PP), Joyce Banda who is also Malawi’s former head of State; the Freedom Party (FP), Khumbo Kachali.

Communicating with the  powerful force of passion to improve the lives of the poor and women in small scale business, Banda said she would ensure to carry on with her passion of working among the poor and the marginalised so that, just as he used to do when she was president.

Banda also took time to reveal increased theft of public funds by the current regime, and in so doing, contributing to shortage of medical drugs in public hospial shortages.

Other speakers during the function were, Freedom Party President, Khumbo Kachali who is  also the former Vice Presidents.

The MCP first Vice President and Presidential Runningmate in the May 21 elections, Sidik Mia also articulated failures by the current regime to address challenges rocking the lives of Malawians.

Over the last weekend, the MCP, PP and FP gurus had put up a formidable force to drum up support for Chakwera in the Shire Valleys districts of Nsanje and Chikwawa.

Like it? Share it!
Sri Lanka attacks: Christians pray at home one week after bombings < Previous
Mulanje business community places hope in UTM… endorses Kaliati Next >
Latest News From Malawi
Headlines From: The Maravi Post