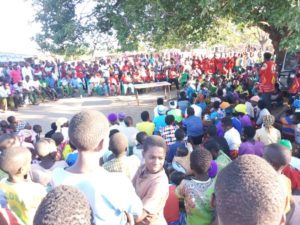 MULANJE-(MaraviPost)-Most shops at Nkando  Trading centre in Mulanje were closed  for the whole day on Saturday as the shop owners  gathered  and  pulled up their support for UTM Party.

It was an all-men event and no woman was part of their  team. In his explanation on the reason why women were left out,  Mazuzo Banda one of the renowned  traders at Nkando  said that they excluded women in their  programe because what they did was another way of appreciating women.

He added that it was all men initiated idea  to talk to men as well as other women who would patronize their open meetings  .

“For a long time women have been portrayed as main players in political rallies as men mostly stay home. We thought it wise to hold these meetings as men and make our women rest  as others have also gone to other  similar meetings,” said Mazuzo.

Speaking at Khwalala village square  , leader of  the business club Joseph Mcherewatha stressed to the people that it is within their rights as Malawians  to  endorse a party they feel can fix the problems they face.

Mcherewatha added that after successful meetings with the former MP of the area Patricia Kaliati , as vendors they were satisfied with  UTM policies on local  businesses as well as  candidate’s  timely intervention when they asked for a  business bailout on immediate loans .

“As business people at Nkando Trading centre, we saw it important to walk with a person who understands our problems ,in this case Patricia Kaliati. Kaliati is a woman who had stood with us for a long time especially in times when our businesses were about to collapse. Ever since we entrusted her  with a Parliamentary seat, she has always been the answer to  the peoples’ problems.

“It is of this course that  we have joined forces with  traders from other constituencies in Mulanje to work together. We have rallied behind UTM as the only hope in this forthcoming elections”, explained Mcherewatha.

The vendors are said to hold similar meetings in all parts of Mulanje as well as Thyolo and Chiradzulu within two weeks as  an appreciation to what they call  a ‘ Gifted hand’’  a nickname that follows Kaliati’s works of charity in the area.

Like it? Share it!
MCP President Chakwera articulates colossal plans for Malawi at Njamba Park < Previous
MSU awarded US$7.8 million grant to promote agricultural transformation in Malawi Next >
Recommended stories you may like: