You are here: Home » Malawi » Health » Taming TB, HIV and AIDS with volunteers 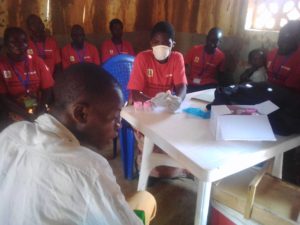 DOWA-(MaraviPost)-The use of volunteers in various rural areas has proven to be the best way of reducing further spread of Tuberculosis (TB).

With community volunteers, early detection of the disease is a recipe for early treatment to contain further spreading.

Equipped with skills of how to detect TB, more cases of TB are being identified and referred to public health facilities for better treatment.

The practice is working magically as from July to September this year, about 82 cases were detected and referred to Dowa District Hospital of which 8 were with support from 290 volunteers that are surrounding 10 out of the 22 health facilities in Dowa district.

“With passion to help others, many have been supported even referred their cases to Dowa Hospital for further treatment. This is despite mobility challenges we face when visiting patients. For instance, our CSCP has managed to refer 57 males and 73 females to Mponela Health Centre. Of these, 3 males and 2 females were diagnosed with TB,” said Martin Samson, one of the Mkhamanga TB volunteers.

“We received two bicycles to aid our mobility but these are not enough to facilitate the 10 of us. As this is not enough, one of the bicycles is not functioning and the one remaining is in poor condition. So, normally we walk to visit the TB presumptive but also to deliver the sputum at the health centre and when we want to collect the results. This is a draw back as we are doing the work voluntarily without any allowance. We would appreciate support on this aspect,” he urged.

Thom disclosed that with the support from volunteers, TB detection rate has improved from five percent to ten which has helped to reduce further spread of the disease.

“Dowa District Hospital detected 677 TB cases from July 2017 to June 2018. 33 of these cases were referred by CSCP volunteers surrounding 10 of the health facilities in Dowa. This has helped us to provide early treatment to patients,” says Thom

Like it? Share it!
Milk from a stone; Of Bullets and Silver’s failure to proceed in CAF competitions < Previous
DPP professional youth league saves MK14m for repairing 300 beds at Bwaira hospital Next >
Recommended stories you may like: