HomeDevelopment‘This is the worst drought in forty years’: Millions of Ethiopians at...
DevelopmentRegional

‘This is the worst drought in forty years’: Millions of Ethiopians at risk from failed rains

As a result of the drought, Zeineba, 60, was forced into the most difficult decision of her life: to leave her neighborhood behind and move to another village, to save her life and that of her family. “My livestock perished from lack of water and pasture, and could not survive the harsh drought anymore. It is painful,” she lamented.

In Somali Region, as in other pastoral areas, livestock are an essential means of survival for the large majority of people, and key to generating income in local markets. Millions like Zeineba have lost their livelihoods, and been forced to move to places where they can receive humanitarian assistance from local people, government or humanitarian organizations.

As the situation worsened in her village, Zeineba started out on foot with her seven children. It took them seven days to reach Higlo humanitarian site for Internally Displaced Persons (IDPs).

‘The situation is dire’

“This is the worst drought in forty years,” says President of Somali Region, Mustafe Mohammed Omer. “The government responded on time to the immediate impact of the drought by providing humanitarian assistance. We will also continue to work assiduously to mitigate the effect of the drought on the people.”

“But the situation is dire”, continues Mr. Omar. “Responding to the increasing needs requires huge resources. Putting all the resources of the region to the drought response will also derail ongoing large-scale development initiatives that have long-term and transformative effects for our communities”.

According to a recent update on the drought issued by Mr. Omar’s office, an estimated one million livestock have also died across 10 drought-affected zones in Somali Region. Livestock across the region are in poor health, and many more are expected to perish from increases in disease during the upcoming rainy season. Vaccination campaigns and livestock feed to save the core breeding stock are urgently needed.

Preparing for droughts and floods

Meanwhile, the United Nations, along with partners on the ground, is supporting affected families with food, water, nutrition, shelter, and other non-food needs.

“Preparations to enable and support a timely response to the ongoing dire humanitarian situation, build resilience, and adapt to the climate crisis are critical for alleviating the impact of the drought on millions of people in the region”, says Catherine Sozi, the UN Resident and Humanitarian Coordinator in Ethiopia.

Flooding could occur during the coming rainy season, which will require a coordinated response and immense resources to protect the communities already being severely impacted by the drought. Fresh funding is urgently needed to address the growing needs of the affected population, including internally displaced persons and the host community.

The UN is supporting longer-term government and community efforts to help communities to be better prepared to cope with droughts and other risks in the future, and is working to improve coordination between all humanitarian bodies in the region.

On Tuesday, Martin Griffiths, the UN head of humanitarian affairs, will take part in a high-level roundtable on the drought in the Horn of Africa 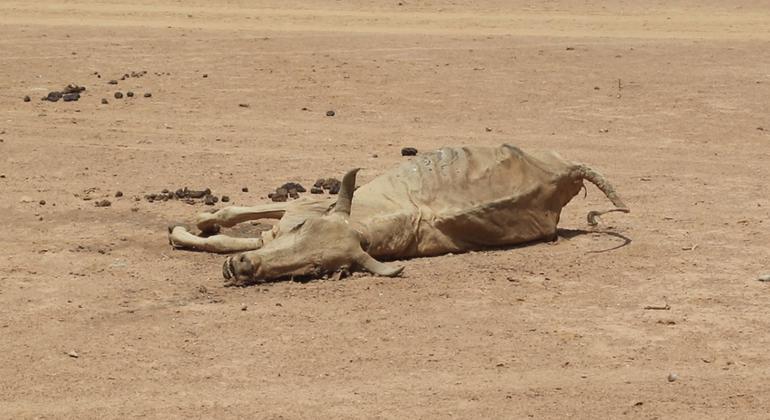