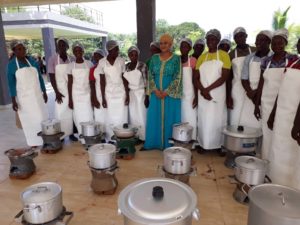 Among them, Free Driving and Cookery classes have commenced with the first intake already bearing fruits.

Captured through the lens, a class of 24 driving school learners have already gone into the third week with an eventual completion coming into sight.

One of the learners, Maxwell Mchenga from Saopa Ward in the constituency is full of praise for Abida Mia when he says, “I can testify she has shaped my future by fulfilling my dreams of seating behind a steering wheel”.

Added Mchenga: “I come from a poor family and without Adona Abida Mia, there is no way I could raise money to enroll for driving school, I therefore pray that God should bless her and give her long life.”

Another Cookery student, Grace Phiri was all smiles to have been given the opportunity to embrace her passion of training as a cook.

She said: “I will be able to have a skill, which I can use not only in getting employment but also in giving the best to my family and people around me through the best cooking in a variety of cuisines.” 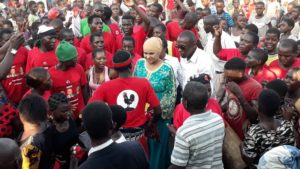 The Shadow MP had some weeks ago purchased a vehicle which learners from all corners of the constituency are using for free driving lessons.

Likewise, Abida Mia had also purchased modern cooking tools and utensils which cookery students are using in the state-of-the-art kitchen.

The politician extraordinaire has grand plan to come up with an employment agency which will assist youths graduating from her skills training initiative get employed in different parts of the country.

On Wednesday, before gracing a football bonanza at the area’s Disco ground, Abida Mia met hundreds of congregants from various Christian  denominations in the constituency where she promised to work with all religions in the promotion of mutual love and peaceful coexistence.

During the meeting, which took place at Makande Baptist Church, Abida Mia called on religious leaders to urge their flock to be at the forefront, spearheading her development agenda in the constituency.

The political leader also pledged to address community problems that mostly affect the lives of women and girls.

At this juncture, she promised to immediately roll out her plan of drilling 27 boreholes on top of heightening her initiative of enrolling youths in skills empowerment training like carpentry and tailoring in addition to the already existing Cookery and Driving training.

Speaking thousands of supporters and followers during a highly patronised football bonanza at the area’s Disco ground, Mia announced about her colossal plan of establishing a university in the constituency where youths would have an easy access to higher learning.

The football bonanza ceremony was also graced by the MCP National Deputy Director of Research, Iryas Abdul Karim, a member of the party’s National Executive Committee (NEC) who is also MP for Chikwawa-South Constituency.

In his remarks, Karim urged the constituents to vote for no other but a kind hearten and charitable female candidate who is also hardworking, Abida Mia if they have to witness the constituency registering tremendous development towards a one great future.

Karim who also marketed the widely acclaimed “Chakwera Super H5” urged on all eligible voters in the constituency and the entire district to vote for MCP leader, Lazarus Chakwera for president who has partnered with their own great son of Muhammed Sidik Mia as Presidential runningmate in the May 21 Elections.

Like it? Share it!
Weird!!!!: 12 Malawian men rape 14 year-old in Chikwawa < Previous
Mwanza man fined for assaulting friend Next >
Latest News From Malawi
Headlines From: The Maravi Post