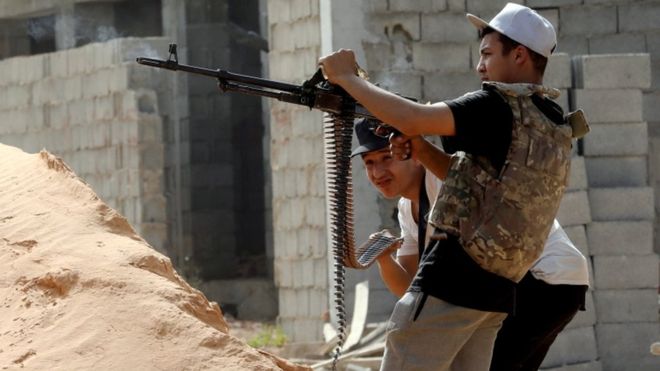 The African Union has welcomed the setting up of a Libyan interim unity government which is expected to oversee elections in December this year.

Delegates at a UN-led forum voted for a three-member presidential council as well as a prime minister.

Mohamed Younes Menfi, a former ambassador to Greece, will be the head of the presidency council.

Abdul Hamid Mohammed Dbeibah, a businessman from Misrata, will also take up the tole of transitional prime minister.

None of these persons chosen will be allowed to take part in elections on 24 December 2021.

This decision was taken at the end of five days of talks in Geneva.

The Chairperson of the African Union Commission Moussa Faki Mahamat said in a statement that the AU “welcomes the results of the vote by Libyan delegates of the United Nations-facilitated Libyan Political Dialogue (LPDF) that elected a transitional government authority to prepare and oversee national elections scheduled for 24 December 2021 in Libya.”

The statement added that “the Chairperson wished to warmly congratulate the members of the new interim authority and encourages all stakeholders to support this historic step in the future for a new unified Libya.

The Chairperson reiterates the continued commitment of the African Union to support and accompany the brotherly people of Libya in their quest towards peace, reconciliation and reconstruction.”

Libya has been in turmoil since the overthrow and killing of former ruler Muammar Gaddafi in 2011 by Nato-backed forces.

The turmoil has led to conflict and the activities of militants who have allowed for the country to become a key trafficking point for migrants seeking to reach Europe across the Mediterranean.

Like it? Share it!
DR Congo’s President Tshisekedi takes over as AU chairman < Previous
Three killed and four wounded in explosion in Afghanistan Next >
Latest News From Malawi
Headlines From: The Maravi Post