You are here: Home » Regional » Bizarre: Pigeon racing blamed for rise of divorces in Indonesia

Bizarre: Pigeon racing blamed for rise of divorces in Indonesia 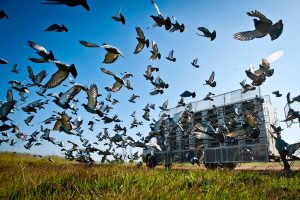 JAVA-(MaraviPost)-Pigeon racing is said to be contributing to massive divorce petitions as husbands prefer the game than their company of their spouses.

Most of the petitioners are wives, who have filed divorce lawsuit for economic reasons, because their husbands are too addicted to pigeon racing.

According to BBC, an official at the Purbalingga Religious Court in the country’s central Java province, reports that their office received 90 petitions for divorce this past July.

The Clerk of the Court Nur Aflah, disclosed that the figure is very huge compared to the June, which was just 13.

Aflah adds that the women are annoyed that their husbands spend all day with their pigeons, instead with their families.

Pigeon racing is hugely popular in Indonesia, where competitors are drawn by cash prizes and hopes of selling a particular fast bird for thousands of rupiah, that country’s currency.

Gambling on pigeon race only leads to further financial distress, as sometimes husbands often ask money from wives for the race than money for buying cigarettes.

Like it? Share it!
Women should not live in fear, but act with courage  < Previous
South Africaat the cross roads:Where will our country be tomorrow? Next >
Latest News From Malawi
Headlines From: The Maravi Post