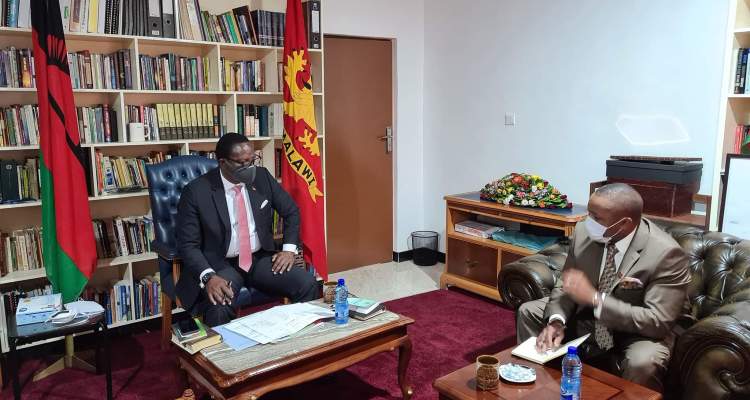 LILONGWE-(MaraviPost)-The catholic church through its social body, Catholic Commission for Justice and Peace-(CCJP) has disclosed that Malawians have lost hope in the President Lazarus Chakwera’s Tonse administration; arguing they are currently in a mood of hopelessness, loss of direction and betrayal.

In a four paged statement signed by the Commission’s national coordinator Boniface Chibwana titled: Heed the Cry of the People; The Call of Moses” observes that recent anti-government protests are just the beginning of people’s anger and sense of betrayal fuelled by lack of decisive leadership.

CCJP has told President Chakwera’s Tonse leadership in the face to match its decorated local and international speeches with actions that would benefit Malawians.

The institution further tells Chakwera to listen the cries of the people most of whom have lost hope with the Tonse “campaign propaganda.”

Below is the CCJP full statement:

HEED THE CRY OF THE PEOPLE; THE CALL OF MOSES
Exodus 3:7 “I have indeed seen the misery of my people in Egypt. I have heard them crying out
because of their slave drivers, and I am concerned about their suffering”.
Introduction
The existence of social injustices perpetrated, tolerated or neglected by those governing is an
affront to the foundations of the Christian faith. Failure by the majority of Malawians to afford
basic needs is inimical to the social and economic development of our society; a real threat to the
sanctity and essence of human life. God expects any leadership to do all it can to promote social
justice for the people, His creation. When there is grave injustice in any society there is serious
violence to people’s rights and dignity. The Catholic Commission for Justice and Peace (CCJP)
is deeply concerned by the prevailing undesirable socio-economic situation in Malawi which has
left many poor people hopeless and distressed. We share the cries of the people of Malawi as
they are genuine concerns that have characterized various aspects of service provision.
Social protection amid rising cost of living
The soaring cost of living in the country is a threat to the enjoyment of basic human rights. We
take cognizance of the fact that the situation may be as a result of global economic phenomena
that have adversely affected the domestic macroeconomic environment. This notwithstanding,
CCJP reiterates that the Government is obligated to cushion and protect the poor from such
socio-economic shocks. With the poverty levels still very high in Malawi the current rising cost
of living has potential to further throw many households in abject poverty. Merely preaching
austerity measures and calling for patience from the citizenry by the Government is a mockery to
human dignity and is tantamount to Government’s abrogation of its duties. It is deplorable that
the prevailing social protection mechanisms do not comprehensively include marginalized
groups like persons with disabilities, the elderly and the urban poor.
Shortage of drugs in public health facilities: potential death trap
The majority of Malawians rely on the public health system which is already challenged in many
ways. Reports of shortage of essential drugs and medical commodities amid questionable expiry
of drug stocks at the Central Medical Stores Trust (CMST) raise critical health governance
questions. While CCJP appreciates the efforts done by the Government to rectify the defects
rocking the public health sector, we are concerned that the authorities have not been transparent
and accountable. It is clear that regular monitoring and auditing of the drug supply chain
management was seriously wanting to allow drugs worth K2 billion expire at the CMST while
the drug management institution is also reported to have incurred huge debts. The situation is
worrisome and calls for urgent accountability actions by relevant duty bearers.
Uncertainty over implementation of the Affordable Input Programme (AIP)
It is imperative to appreciate and note the efforts by the Government in the management of the
AIP in a bid to enhance food security in Malawi. Nevertheless, the uncertainties surrounding the
smooth implementation of the social protection initiative regarding the Government’s contractual
agreement with suppliers, logistical arrangements, pricing, availability and accessibility of the
inputs are a great threat to the livelihood of many. Security of the AIP commodities is another
apprehension in light of reports of theft of the inputs in some areas in the country.

CCJP further calls for the depoliticisation of the AIP to ensure its effectiveness and efficiency.
Delays in procurement of maize by ADMARC
It is common knowledge that institutional lapses at the national grain marketer, ADMARC,
automatically worsen farm produce market availability and accessibility to the majority of
farmers especially those in hard-to-reach and remote areas. It is our observation, at CCJP, that
the continued delays for ADMARC to buy maize from subsistence famers will lead to the
economic exploitation of most poor farmers. This is also a recipe for disaster as far as national
and household food security is concerned.
NOCMA operationalisation, fuel procurement mess and politicisation
We are deeply saddened with the reported mess in the fuel procurement at the parastatal,
National Oil Company of Malawi (NOCMA) as local transporters are still being sidelined and
their voices ignored. CCJP feels that the lack of transparency and accountability in the shady
introduction of a new fuel procurement system at NOCMA smacks of a slap in the face of
ordinary and hardworking Malawians who deserve a good business environment. We have also
noted with concern that despite efforts by the local haulage to have NOCMA officials use Extank system of procuring fuel, NOCMA officials have gone ahead to introduce new system
called DPU which was not part of the bidding document. The politicization of NOCMA’s
strategic decision making, management and operationalisation is a critical threat to the corporate
governance delivery of the body. We are worried that continued failure by the Government and
appropriate authorities to take concrete action on the fuel procurement mess entails potential
rent-seeking and corruption. Who is the ultimate beneficiary of this mess?
Persistent poor service delivery: are the Public Sector Reforms citizen-centred?
The Government should be applauded for championing the new wave of Public Sector Reforms
(PSR) Programme. It is the view of CCJP that there is need for holistic, effective, meaningful
and people-centred reform of the public sector. The experience of the PSR processes, so far, have
revealed that public service institutions are not accountable to the citizens but to the central
government and political leadership. Citizen access to information in public bodies is still a huge
challenge; negatively affecting people’s involvement and participation in service provision and
in the PSR processes. Therefore, it is not surprising that service provision in various spheres like
health, education, agriculture and social protection is still problematic despite the lauded
successes of the PSR initiative by the political governing.
We also appreciate Government’s initiatives such as reviewing operational systems in the public
service, under the PSR process, and the promise for a Cabinet assessment. However, failure to
release the reports on these important initiatives is worrisome.
National state of hopelessness and loss of direction
It is common knowledge that the prevailing mood in the country is that of hopelessness, loss of
direction and betrayal. The Tonse Alliance Government was voted into power because its
campaign promises (which now we can correctly call propaganda) gave hope to most Malawians
regarding being taken out of dehumanizing levels of poverty. But in less than two years all
citizens, except for the few well connected, all that hope is lost. More seriously citizens don’t
even know where the country is going. Recent street demonstrations are but just the beginning of
the manifestation of people’s hopelessness, feeling of having been betrayed and their anger. The
citizens’ anger is fuelled by the general perception that the country lacks decisive leadership. We
pray that while citizens have a right and duty to express their dissatisfaction with the
performance of their Government everything should be done according to laws of the land.
Our Call for Action
In view of this undesirable situation in the country, CCJP calls for the following actions;
• That Parliament and Ministry of Health should regularly monitor and audit drug
management system in the country including procurement;
• The Government should urgently institute inclusive and transparent social protection
mechanisms to cushion the poor from the social economic hardships;
• There is need for an honest reform and review of the operationalisation of ADMARC in
order to enhance its efficiency and effectiveness;
• That ACB should effectively investigate potential elements of corruption and rentseeking surrounding NOCMA’s operations and that the logical conclusion to the cases be
expedited;
• Ensure that Public Sector Reforms are citizen centered that enhance social accountability
in public service provision;
• That the Government should match its decorated local and international speeches with
actions that would benefit Malawians;
• That the political leadership should walk the talk in implementing austerity measures in
light of the undesirable prevailing socio-economic situation.
4
• The Government should heed the cry of the citizens most of whom have lost hope in the
current Government’s ability to live up to its campaign propaganda – let alone lift them
out of their daily worsening living conditions. The growing frustration and loss of hope
by citizens should be addressed as matter of urgency.