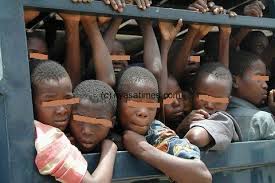 Officials at the Salvation Army Transit Center in Mchinji district, are searching for five children, under the ages of 14 and 15 years. The reports reaching the Maravi Post say the children have been missing since Tuesday.

One of the senior officers at the Transit Center, who spoke on condition of anonymity, confirmed on Wednesday saying the five are suspected to have jumped the Center’s brick fence in the early hours of the Tuesday.

The development has heightened fears of child trafficking in the district.

Among the escapees according to our source, are two girls, one from Mzimba district and the other one from Dowa, and three boys, one from Lilongwe and two from Kasungu.

“Yes, five children are missed here and we believe that they jumped our fence. However, we suspect that this was with influence from someone, therefore we cannot conclude that it was child trafficking, ” said the source.

The source, however added that the Center together with the Police, immediately launched a search and an investigation on the matter.

Records show that the escapees have been at the Transit Center for just 2 to 3 months, after they were rescued from traffickers with different intentions.

Mchinji police are yet to issue a comment on the matter.

Like it? Share it!
Malawi Ministry of Agriculture fires 68 workers over cash gate < Previous
Kenya election: Uhuru Kenyatta defeats Raila Odinga with 54% votes Next >
Recommended stories you may like: