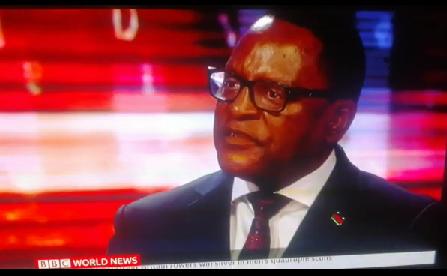 Malawi government is demanding an apology from The Times of the UK over an article it published claiming that Malawi’s President Dr Lazarus Chakwera travelled to London to attend a virtual summit due to unreliable internet in the country.

The article also stated that the Malawi leader traveled to UK with his family (wife Monica, daughter Violent and his son-in-law Sean Kampondeni).

But the Minister of Information, Gospel Kazako, who is government spokesperson, argues the article is misleading and inaccurate with potential to damage the reputation of the Chakwera and the country as well.

travels,” said Kazako in a statement issued on Wednesday.

Chakwera is London attending the Global Education Summit financed by the Global Partnership for Education (GPE), which started on 28th July and ends on Thursday, 29th July 2021.

Kazako said Chakwera was invited by the Co-chairs, President Uhuru Kenyatta of Kenya and the UK Prime Minister, Boris Johnson.

Other leaders attending the summit include Presidents of Ghana, Sierra

“The Government of Malawi, therefore, has been compelled to seek an apology and retraction of the malignant story and reportage by The Times the UK, and that the article is withdrawn from all its platforms. We have dispatched correspondence relaying the same to

“The Global Education Summit will benefit Malawi in leveraging International Education Grants that will support basic education. With economic impact of the Covid 19 pandemic, Malawi’s physical presence at the summit is crucial as the country will be among distinguished players in the global education sector which offers education financing,” explains Kazako.

He, therefore said Malawians should be proud that Chakwera is attending such an important summit as it is an opportunity to negotiate for funding aimed at improving the education standards in the country.

According to him, Malawi has been a recipient of GPE funding since 2010 (US$ 90million Fast Track Initiative Catalytic Fund in 2010-2014; US$ 44.5million 2016-2020, Malawi Education Sector Improvement Project; and US$10million grant, accelerated funding on COVID-19 Response May 2020 to November 2021). Malawi is in the process of applying for new funding (US$ 57 million from GPE of which US$ 48.7 million has already been approved by the GPE Board) for the Malawi Education Reform Programme (2021-2025).