HomeMalawiMalawi Pres. Mutharika told to go ‘who cares where’ as Unima Council...
Malawi 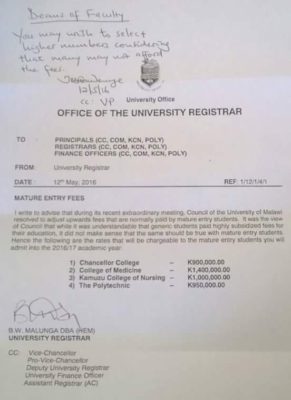 In its letter to the principals, registrars, and finance officers of its constituent colleges dated 12th May 2016 signed by B.W Malunga, the Council advises that the new rates are effective the 2016/17 academic year.

A snap survey our correspondent has conducted shows that very few mature entry students will afford such exorbitant fees.

“It’s more like telling us ‘we don’t want you here, go away’”, a third year mature entry at Polytechnic lamented to our correspondent.

Other students at Polytechnic were outright to bay for Mutharika’s blood.

“He has failed us. He must go who cares where. Look at the comment on the memo. It simply shows these people, deep down their hearts, know that this fees hike is obscene and that Malawians can’t afford that,” concurred a group of students at Polytechnic adding that the hiking of the fees is Mutharika’s decision hence the reason why he must go as he is making the nation to look more miserable.

It is yet to be seen if the new fees will be implemented as some quarters have faulted the fees hike for being indiscriminately exorbitant.

This is not the first time Unima Council has raised fees. Its previous fees raise has always attracted some reservations and strong criticism.