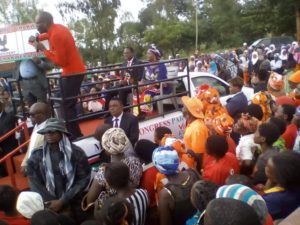 The people in the tea estate districts of Thyolo and Mulanje can count on the Malawi Congress Party (MCP) government administration as the one that will completely  solve the long standing problem of land shortage.

The party’s President, Lazurus Chakwera made the commitment on Tuesday when touring the three districts of Thyolo, Mulanje and Phalombe in whistle stop.

Chakwera said, he is aware of the outstanding issue of land shortage which, leader of People’s Land Organisation (PLO), Vincent Wandale had previously tackled.

He mentioned this after he described the controversial Wandale as sane and patriotic for standing up for the people to address the land issue which tea estates owns at the expense of the majority poor.

“Wandale was by no means not insane as he was described because all he wanted was to address the problem of land, which the estates had apportioned  themselves while the majority had nowhere to build and caltivate’ said Chakwera.

The whistle stop to Sapitwa districts started at Bvumbwe Trading Centre in Thyolo North Constituency then Mangunda also in Thyolo East before proceeding to Chisitu ground in Mulanje Central, Kambenje in Mulanje Pasani and Phalombe boma in Phalombe South Constituency.

Other notable party gurus that accompanied Chakwera on the tour were the MCP Vice President, Sidik Mia and People’s Party (PP) Veep for the South, Ephraim Chivundi.

Both Mia and Chivundi urged eligible voters to render their vote to the God-fearing leader, Dr Lazarus Chakwera whom they can rest be assured of transforming Malawi into a one great nation along with his famous “Chakwera Super Hi-5”.

Like it? Share it!
NIS, MEC in tug of war over wireless messages; Road to Malawi’s May 21 polls < Previous
Commonwealth celebrate 70th anniversary Next >
Recommended stories you may like: