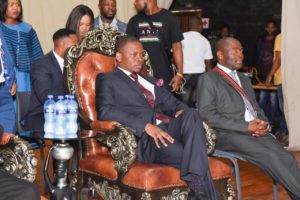 The prophet also sealed a charity partnership with local charity organization, Sakhululeka Iswize, which will see the two working together in different humanitarian causes.

Sakhululeka Iswize is run by Chief Makinana from the area and the money was channeled through the organization.

The ECG leader flew to East London on Friday last where he met local people, chiefs and held a town-hall meetings with various groups of charity organizations to advance his cause of charity in South Africa.

In his speech, Prophet Bushiri explained that he will always support any movement that is driven by humanitarian causes.

“Today, I am very happy that I am fulfilling the pledge and, also, officially sealing the charity partnership with Sakhululeka Iswize,” he said.

Founder of Sakhululeka Iswize, Chief Makinana, hailed Prophet Bushiri for not just honouring the pledge but also for visiting the East London and spending time with the people.