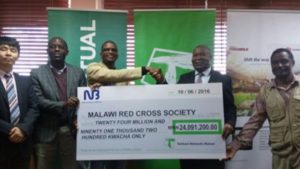 Malawi’s premier mobile network and ICT service provider TNM has handed over K24 million to the Red Cross to assist with relief efforts for victims of floods that hit the country’s Northern region.

“Following appeals by government and relief agencies for help, we at TNM responded by creating a special SMS platform to generate money to go towards the disaster,” said Chief Commercial Officer Daniel Makata.

He said TNM decided to channel the funds through Red Cross because of the charity’s vast experience in managing resources meant for disasters.

“TNM decided to channel the funds raised through the Red Cross as they are working closely with victims and support structures in the affected communities. Furthermore, the Red Cross is one of the world’s largest humanitarian organisations” said Makata.

He said in addition to the SMS fundraiser, TNM also donated 282,000 minutes of talk-time to 93,430 customers living in the affected areas.