US vet. in Normandy’s plea to younger generation

Several dozen World War II veterans are expected to attend D-Day commemoration ceremonies Monday in France, as crowds return for the 78th anniversary. Visits and services have for two years been reduced to a minimum due to COVID-19 restrictions. On Monday, U.S. Veteran Charles Shay gave what he said was his last appearance at Omaha beach. The 98-year-old Penobscot Native American from Indian Island, Maine, took part in a sage-burning ceremony near the beach in Saint-Laurent-sur-Mer. Shay, who now lives in Normandy, was a 19-year-old U.S. Army medic when he landed on Omaha Beach on June 6, 1944. Since 2007 Shay has been holding a service at the beach, but has now passed the torch to Gulf War veteran Julia Kelly. When asked if he had a message for the younger generation, he said they should “be ever vigilant”. Several thousand people were expected Monday at a ceremony later at the American Cemetery overlooking Omaha Beach in the French town of Colleville-sur-Mer. 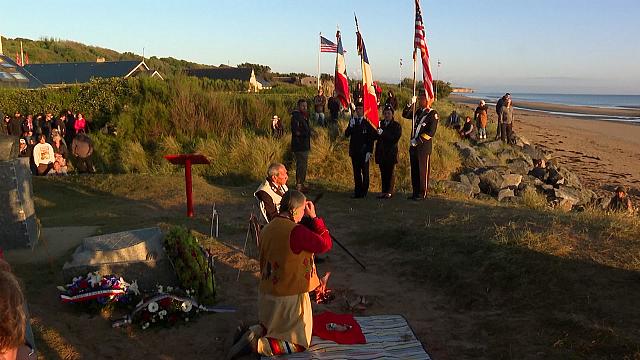