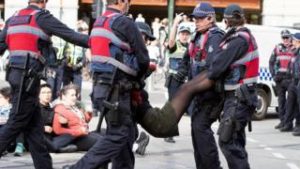 Police forcibly removed some protesters from a busy intersection in Melbourne

According to BBC,On Monday, activists broke into abattoirs and chained themselves up to protest against the meat industry.

More than 100 protesters also blocked one of Melbourne’s main intersections, before many were forcibly removed.

Mr Morrison said the activism was damaging to farmers’ livelihoods.

Germany to stick to timetable to withdraw troops from Mali

Election officials in Nigeria carry out mock tests ahead of polls