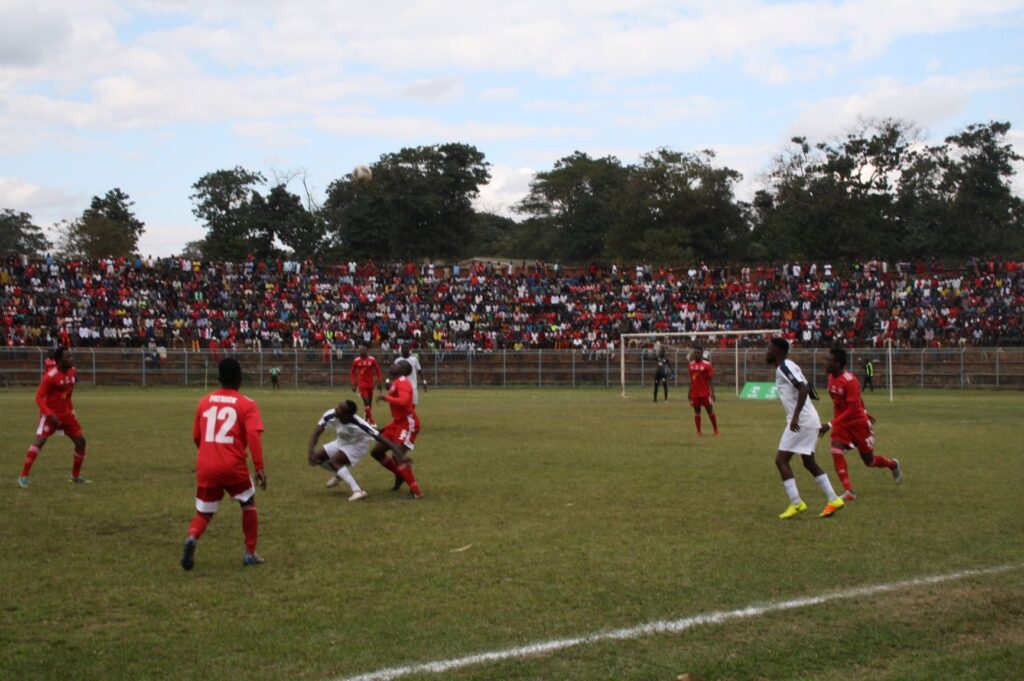 Blue Eagles on a cloudy Saturday afternoon came from behind to register a 2-1 win over disjointed Nyasa Big Bullets in the TNM Super league match played at Area 30’s Nankhaka ground in Lilongwe before a capacity crowd.

Bullets managed to showcase their passing and attacking in the first 40 minutes of the game before Eagles took control of the proceedings and Bullets “Nkumadzulo” tag never came to play.

With the win, the Area 30 outfit has moved from fourth position with 14 points from seven games while Kamuzu Barracks have taken over the leadership after they collected maximum points after beating Ntopwa 1-0 through World Nkuliwa’s spot kick and have better goal difference of five

Eagles have inflected Bullets their first loss of the season and rekindled their belief that Nankhaka is fortress and they still remain fifth on the log table with 10 points from six games and Mhone was named man of the match.

Bullets wonder kid. Peter Banda was the player to watch with his dynamic moves which saw him score the opener and had a field day on the right flank which forced Eagles technical panel to make early substitution by resting midfielder, Henry Misinjo for   Jacob Robert and the move stabilized their left flank.

The first seven minutes of the encounter produce nothing tangible until into the eight minute when Bullets midfielder, Henry Kabichi hard drive went over the bar.

Bullets centre forward, Chiukepo Msowoya had a glorious chance in the 17th when he was put through by enterprising right winger, Banda but his shot hit the side netting.

Msowoya was at it again in the 42nd minute when he weak shot went into the palms of the goalie, Soko from the penalty box when Banda had turned a provider.

The two teams went for recess when they were tied at 1-1 to the disbelief of Bullets fans taking into account a number of missed opportunities they had squandered through Kabichi, Msowoya, Nelson Kangunje and Patrick Phiri.

The second half saw Bullets bringing in Mike Mkwate for Kangunje to strengthen their midfield which was losing a lot of balls at time with poor passes.

Eagles stretched the lead to 2-1 in the 47th minute, when Mhone shot was deflected into the net by Mkandawire.

Bullets rested Kabichi for Bright Munthali in the 55th minute but the move did not change things as Eagles continued their dominance over the visitors as Bullets fans went into total silence.

Mhone was unlucky in the 69th minute when he connected Schumacher Kuwali’s cross from the left flank but the ball hit the cross bar with no one from eagles to finish off.

Bullets captain, Pilirani Zonda had a horrible second half as Kuwali had stepped up his efforts and look dangerous on counter attacks.

Bullets Coach, Calisto Pasuwa bemoaned the absence of some of the key players in the team due to injuries.

“We are trying to build a new team and today we had used some players who were not on the starting lineup in our last game. We are giving each player a chance to prove themselves because we have so many games to play this year,” he said

“Am very happy that we won the game and collected maximum points and to us this is what we had planned for,” Blue Eagles Coach, Derkleck Msakakuona said.

He praised his charges for putting up much effort in the games which he described as not easy one.

Blue eagles have managed to shot two Blantyre giants without miss as they managed to collect three points from Be Forward Wanderers by beating them 3-1 at Kamuzu Stadium in Blantyre.