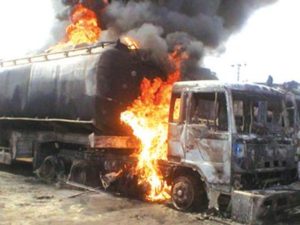 Fuel tanker which was heading to Malawi exploded in northern Mozambique as residents gathered around to buy fuel from the driver on Thursday, killing 73 people and injuring 110 others, Mozambican media reported.

Dozens of charred bodies were scattered around the blast site in the town of Caphiridzange in Tete province, and government officials believed more bodies might be in surrounding woods, Radio Mozambique reported.

Some badly burned people had tried to run into a nearby river, the radio said.

A truck driver from neighboring Malawi had turned off the main road to sell fuel to local residents, who were gathered around the vehicle when the fuel caught fire, according to Radio Mozambique.

Medical teams rushed to the scene of the accident, evacuating the injured in ambulances and other vehicles. Searchers looked for more victims, though their efforts were hampered as night fell.

The cause of the explosion was not immediately clear. Citing Mozambican reports, the Portuguese news agency Lusa said one theory was that a fire near the tanker set off the blast, while another theory pointed to a lightning strike as residents were collecting the fuel.

A national government task force planned to travel to the accident site on Friday.

Like it? Share it!
Malawian soccer lover to quit football sponsorship, blames tribalism in the Northern Region < Previous
Malawi to have another hydropower plant Next >
Recommended stories you may like: