You are here: Home » Religion » Is TB Joshua not another religious fraudster?

Rejected for Christ. I live in the UK and have been following TB Joshua’s ministry for several years now. I cannot help noticing that many out there seem to mock SCOAN, and rebuke his ministry. Am I surprised? No, not at all, as they did exactly the same to Jesus in His time. People accused Jesus of being both demonic (Matthew 12:22-32) and a fraudster (Luke 23:11).
It’s seems to be the way of the world. If people don’t understand something, or can’t achieve it for themselves then they just have to tear it down. I’m a disabled middle-aged woman from the UK with a serious genetic disorder. I’ve never been able to travel to SCOAN in Lagos. I’ve never even met TB Joshua, so how can I be so certain that he really is a prophet of God? Some might say it’s just wishful thinking on my part. After all my son has inherited my disorder too, so maybe I just want to believe there is a cure out there for both of us? Some might even say I’m desperate enough to believe in anything. Actually, I’d say the opposite. Read more from Article Source

I wouldn’t risk putting all my hope in false promises. If anything, such claims might make someone like me even more wary, especially if I followed the negative feedback out there. It would just be cruel to give my son false hope. Yes, I am a Christian, but my son isn’t, so the last thing I’d want to do is let my son witness that my faith in a prophet of God is wrong. I also know that Jesus warned us to be wary of false prophets, those who come in sheep’s clothing but are in fact ravenous like wolves (Matthew 7:15-20). So why haven’t I joined the line of sceptic’s out there who believe that TB Joshua is just another religious fraudster, like so many before him? After all there are loads of fake ministries out there making tons of money out of people’s misery, so what makes TB Joshua any different? For one reason and one reason only. Jesus told us that we would recognise true prophets by their fruits, and that a bad tree only produces bad fruit whilst a good tree produces good fruit. (Matthew 7:16-18).

I used to be a children’s teacher before this illness stole my health. I would always teach the children to be willing to find things out for themselves, and make up their own minds. I’d encourage them to explore the facts thoroughly before they blindly accepted the beliefs of others. So that’s exactly what I did with TB Joshua, and this is what I’ve discovered. TB Joshua comes from a very humble background. In fact, he is a very humble man. At his latest birthday celebrations, he denied that he was a celebrity. He had no desire to seek celebrity status. Instead he called himself “a man of the people”. Then he told the multitude that what would really please this “man of the people” would be if they were willing to share what they had (time, money and food) with those without them. Is that the language of a fraudster? When he first decided to build the Church of All Nations he got on his hands and knees and helped to build it, from the drains up. Is that the actions of a fraudster? The other day I watched one of his Youtube videos in amazement.

A pastor had come to the SCOAN church and admitted that he had told everyone in his own church that TB Joshua was a fraud, and to avoid SCOAN. That pastor had suffered greatly in his 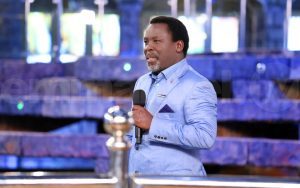 personal life, and on advice from another pastor, visited SCOAN to seek forgiveness. Would a pastor be willing to humiliate himself like that in front of the world (and his own parishioners), if it was just lying? And how did TB Joshua respond to this pastor? He called him a ‘ friend and brother’, and reassured him that God had allowed it and forgave him fully. Is that the actions of a fraudster out for financial gain? Sadly, there are many out there today (including too many Christians), who mock his focus on demonic possessions and healing. Indeed, here in the UK, very few churches seem to include this topic in their ministry, even when they hold regular healing ministries. I know! I’ve done my research! Yet this is the part of his ministry that convinces me most.
TB Joshua ministry focuses on healing people from demonic oppression. Who else did that? Jesus of course! He took demons very seriously and confronted them eleven times in the bible. He was even visited by one himself at the start of His ministry (Matthew 4:1-11) He showed his apostles exactly how to confront demons, in the same way that TB Joshua confronts them today (Matthew 8;28-34). Of course, Jesus was accused of driving out demons through the power of demons within himself (Matthew 12;22-32), and was very unpopular with the churches of His time. Is this all sounding a little too familiar? TB Joshua’s ministry has been accused of manipulating the poor and dispossessed in society, yet isn’t that exactly the same type of people that Jesus worked with? Jesus recognised that the majority of those who had power, authority and comfort in society would not listen to Him or accept His message. So that’s why he worked mostly with the poor, the lonely and the suffering; those that society had rejected. He cared very deeply for such people, people like Mary Magdalene, the first person to recognise Him after he rose from the dead, yet had been healed of seven demons by Jesus (Mark 16:9).

Demonic possession is one of the best kept secrets in modern Christianity today, as it no longer seems accepted by civilised” society today. Yet Jesus sent his apostles out with the authority to cast such demons out, just like TB Joshua does today (Mathew 10:1). Indeed, after the resurrection He told his apostles that one of signs of the Spirit would be the ability to cast out demons! ” In my name they will drive out demons” (Mark 16:17). So why do Christians today choose to ignore this critical aspect of ministry and are so judgemental about TB Joshua’s work? The fact is even some of Jesus’s own disciples struggled with belief at times, and had been unable to cast out a demon in a young boy (Mark 9:14-29). What did Jesus say about their failure at the time? ” If you have the faith of a mustard seed…. nothing will be impossible for you” (Mark 9:14-29).
So, I just wonder what would happen if all those sceptics out there were willing to risk opening their minds and hearts to the teachings of Jesus instead? And no, to be absolutely clear, I’m not saying that JB Joshua is Jesus! I’m just saying that He is an obedient apostle who reflects what can be achieved when we are willing to fully submit ourselves fully to Jesus’s teachings. As Jesus so clearly reminds us “Everything is possible for one who has faith” (Luke 4:41). God bless your work. Mandy Edwards from England I would love to write more often for you.

Like it? Share it!
Facebook, together with Africa Check, expands its local language coverage as part of its Third-Party Fact-Checking Programme < Previous
SADC ignores contentious ongoing election case, congratulates Malawi on peaceful and successful elections Next >
Recommended stories you may like:

26 thoughts on “Is TB Joshua not another religious fraudster?”