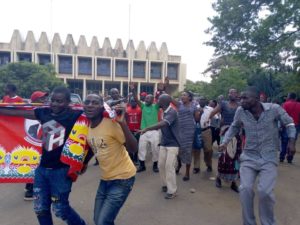 The warning comes following some Malawi Congress Party (MCP) and Democratic Progressive Party (DPP) supporters who have already started celebrating victory of the elections before the commission final results announcement.

Dr Ansah was addressing the tenth briefing on elections updates.

She told the nation that the commission was working on 147 complaints before making final elections results.

“Avoid giving your supporters false hopes of winning elections based on social media. Advise your supporters to remain calm until the commission reaches conclusions on who wins”, she urges political leaders.

Like it? Share it!
#Malawi2019Votes: Heavy armed presence in Malawi’s major cities amid MEC’s holding election results < Previous
#Malawi2019Votes: Angry vendors beat Nicholas Dausi on his way to MEC offices in Blantyre Next >