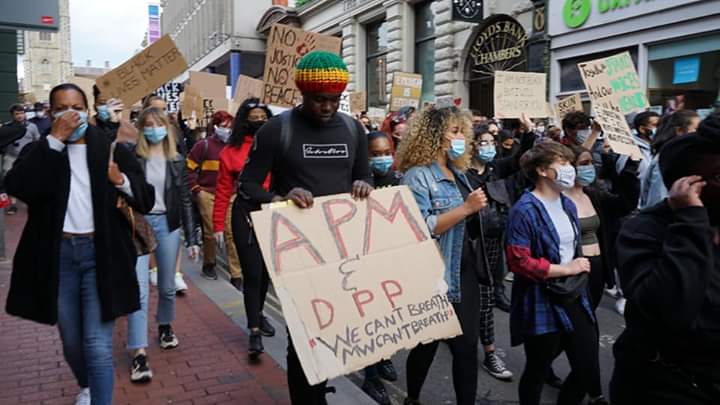 The Maravi Post is yet to learn from Mapemba on what motive behind the placard.

There has been cold blood between HRDC and Mutharika over resignation of the former Malawi Electoral Commission (MEC) chairperson Jane Ansah since nullified May 21, 2019 polls.

Thousands of demonstrators gathered in UK’s Birmingham to protest about the death of George Floyd in US police custody.

Floyd, an African-American, died on May 25, 2020 when a white police officer continued to kneel on his neck after he pleaded he could not breathe.

Thousands of people marched in London on Wednesday after the death sparked global protests against racism.

The Birmingham protest started outside the library but later moved through the city to the police’s headquarters.

West Midlands Police said an estimated 4,000 people took part and there were no arrests.

“The protesters were loud and passionate, and made their voices clearly heard, but there were no arrests and no disorder,” a force spokesman said.

Image captionThe city “has a proud history of standing up to racism”, the council said

Protest organisers UK Isn’t Innocent said Britain had “a duty to stand in solidarity with the US while exposing the inner workings of racism and police brutality in the UK”.

“We are tired and we have been tired for too long,” lead organiser Hannah Ringane said.

“We have been taught that we won’t be treated the same as everyone else, that we will be viewed as aggressors.”Image captionGeorge Floyd’s death has led to protests around the worldImage captionThe demonstration had to be relocated to a larger square due to the number of protesters

Carol Smith, who was among the demonstrators, said: “My grandchildren were born here, they have to have a different world to the world I have.

“Not just for us, but changes for the world. These are the things that are demanded now.”Image captionProtesters in Birmingham shouted “I can’t breathe”Image captionCrowds took a knee as the protest moved through the city

Aston Villa and England defender Tyrone Mings – who was targeted with racist abuse while playing for his country against Bulgaria last year – indicated he would join demonstrators, urging his followers online to “stand for what’s right”

People were originally due to gather in Victoria Square outside the council house, but when it became clear the numbers would be too large it was moved to Centenary Square.

In the past month, the Independent Office for Police Conduct has begun nine investigations into West Midlands Police connected to alleged excessive use of force on black men and two officers have been suspended.

Ch Insp Sarah Tambling, from the force, said she was “really pleased with the atmosphere” at the protest in the city.

According to BBC, although some people have begun to leave, many more are continuing to arrive. The atmosphere has been good, with whole families coming to express their solidarity with the demonstrators.

A handful of police liaison officers have kept a respectful distance and the crowds have remained peaceful.

The younger generation in particular have made banners with clever slogans, while several older onlookers, especially from the Afro-Caribbean community, have been overcome with emotion when they see the size of the crowd.Image captionThe demonstration began in Centenary SquareImage captionThe protest moved down Colmore Row after stopping outside West Midlands Police’s headquarters

“The city of Birmingham has a long and proud history of standing up to racism and to prejudice, and that is why today we stand in solidarity with the Black Lives Matter movement,” said Labour councillor and cabinet member for social inclusion John Cotton.