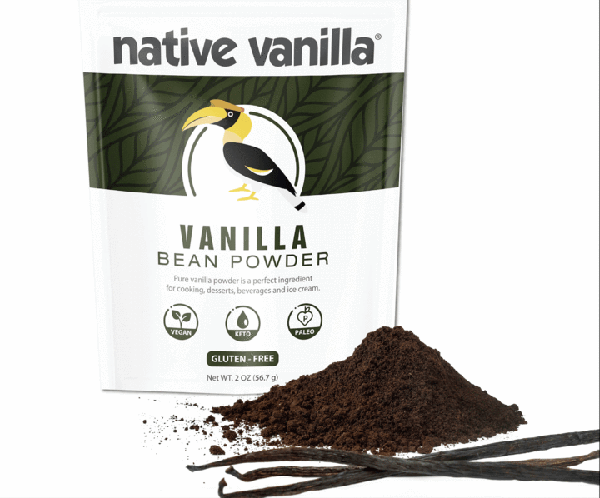 
Vanilla has been used for centuries in its various forms as either beans, extract, or powder. Vanilla powder is made when vanilla beans are dried and ground into a powder form. Despite this reduced form, it does not take away from its distinctive flavour.

Vanilla powder is readily available from a variety of sources and stores, it can also be bought online from popular retail outlets.

Pure vanilla powder has a variety of applications from being used in baking, to being mixed with sugar and sprinkled on top of baked goods such as cookies, doughnuts, or used to infuse pancakes, or waffles.

In addition to this, people prefer using vanilla powder without the addition of sugar, to ensure that it is a healthy ingredient in smoothies, and other health-conscious foods.

Vanilla powder is extremely rich is magnesium calcium, potassium, and manganese, which, when consumed in moderation and added to a healthy regime, has numerous health benefits.

Vanilla in its various forms has been used for centuries to help soothe inflammation throughout the body, especially in the liver.

Due to its antioxidant properties, vanillin is a crucial part in vanilla’s ability to fight inflammation and alleviate conditions such as arthritis and gout.

2.  It is a natural aphrodisiac

Not a lot of people will be familiar with this benefit, but vanilla has been used since ancient times as an aphrodisiac. Whether consumed, or used in aromatherapy, or essential oils, vanilla boosts testosterone levels in men.

The aroma associated with vanilla is known to boost induced feelings of pleasure and satiation greatly.


There have been numerous studies which have shown that vanilla can help people in their weight loss programmes. This works in addition with a healthy, balanced, nutritious meal plan and exercise.

Vanilla is often used in cough remedies to mask the bitter taste but research into the healing properties of vanilla have shown that vanilla does much more than just that.

Due to vanilla’s mild anaesthetic properties, symptoms such as pain from a sore throat and even a headache can be alleviated by natural remedies that contain vanilla.

When using vanilla products, from powder, beans, and even in the form of herbal teas, it is known to aid in ailments associated with the digestive tract. Vanilla also aids in alleviating an upset stomach, nausea, and vomiting.

Vanilla contains vanillin, which is similar to capsaicin, which is found in chilli peppers and cinnamon, amidst other spices.

Vanillin has a positive effect on the central nervous system in addition to having pain relieving and anaesthetic properties which alleviate toothache and help to fight infection in the gums, teeth, and mouth overall.

Vanilla has been used for various purposes for centuries and new ways of incorporating it into daily life are being discovered as a move towards healthier, more natural remedies are being sought out as opposed to supporting pharmaceutical giants.