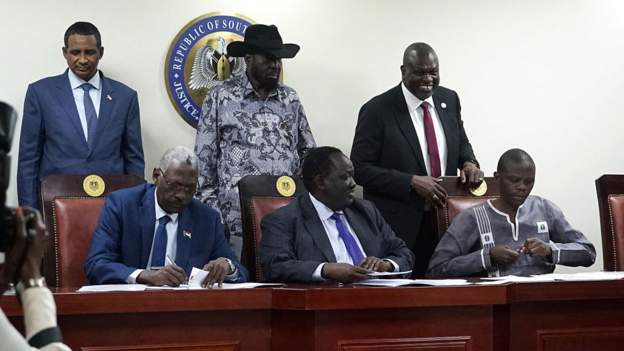 
In a move that could signal a significant approach towards ensuring a sustainable peace deal, South Sudan’s political rivals have now agreed to form a unified armed forces command.

Major General Martin Abucha, who represented Mr Machar’s faction said “People of South Sudan are yearning for peace and peace is about security and today we have made a milestone in that. We have agreed that we shall be moving forward.”

“I want to call on my colleagues from the other sides that it is important to silence the guns so that South Sudan can prosper. Let there be no fighting, let there be no attacks,” he added.

Both President Kiir and vice president Machar looked on as the deal was signed.

In the past fighters from both camps launch attacks on each other derailing efforts at lasting peace.

With this deal terms of integrating opposition commanders into the armed forces has been set out.

Factions belonging to President Kiir will have a 60% representation in key positions in the army, police and security forces.

That faction belonging to vice president Machar – the SPLM-IO and other opposition groups will occupy the remaining 40%.


According to the deal the opposition is to submit the list of their commanders within a period of one week, to be followed by the graduation of the unified forces and their deployment – which should not exceed a period of two months.

It’s been two years since the rival political factions signed a peace deal that ushered in a unity government that was supposed to restore peace to the country.

Riek Machar and three other persons were sworn in as vice presidents at the time as part of the deal.

The formation of a unity government was seen as a major move that could definitively end years of fighting in the country.

That transitional government was to govern for three years and that mandate expires next year to make way for elections.

The East African body, Igad, has said that the peace deal signed in 2020 is facing challenges, including unresolved issues on the writing of a new constitution and preparations for fresh elections.

The body however hailed Sunday’s deal for a unified army command calling it “a major breakthrough”.