The Revitalized Peace Agreement, signed by the Government and opposition groups four years ago, ended years of conflict in the world’s youngest nation, independent since July 2011.

“Owing to relative peace, the internally displaced and the refugees have been voluntarily returning home, although more formal reintegration remains a challenge due to limited resources,” said Mr. Abdelbagi.

Furthermore, the parties have agreed on a roadmap to complete the remaining tasks under the agreement, which will pave the way for elections when the transitional period ends in 2025.

The Vice-President added that the command structure of the National Unified Forces has also been established, describing the development as “a major leap” towards their transformation and regularization.

However, implementation of the peace deal is facing several challenges, “and sanctions imposed by international partners on individuals and entities are disservice to this course,” he said.

“We are calling upon the international community, and the UN in particular, to revise individual and targeted sanctions, arms embargo imposed on South Sudan, to enable successful completion of the remaining provisions of the peace agreement outlined in the New Roadmap.”

Mr. Abdelbagi also reported on other obstacles South Sudan is facing. Up to 80 per cent of the country has been affected by floods for the past three years, making it evident that “climate change is real”.

To mitigate the effects on both lives and livelihoods, the authorities are donating $10 million to the UN World Food Programme (WFP) to assist displaced communities.

“However, we need the support of the international community to reach all the flood and drought-affected areas and communities,” he said.

The Government also conducted an analysis earlier this year, which revealed that an estimated 6.8 million people, more than half the population, are facing food insecurity, with some 2.37 million at emergency level.

“The severe food insecurity is worsened by combinations of shocks including flooding, prolonged draught, physical insecurity, and the effects of COVID-19,” he said.

Addressing the pandemic, Mr. Abdelbagi reported that South Sudan has been able to contain coronavirus spread “through thoughtful and targeted actions”.  The result has been very low morbidity and fatality rates.

As of 9 May, only 17,513 confirmed COVID-19 cases, including 138 deaths, have been reported since the start of the pandemic, and vaccine coverage stands at   45 per cent among adults.

“Despite this positive health news, the pandemic has had negative effects on the economy, starting with dramatic declines in domestic production and revenue collection, followed by a rising cost of living,” he said.

Mr. Abdelbagi also highlighted South Sudan’s efforts to promote peace and stability, both in the region and beyond.

The country successfully mediated the armed conflict in neighboring Sudan, which resulted in the signing of a peace agreement in 2020.

“South Sudan stands ready to mediate the current conflict between the army and the Forces of Freedom and Change (FFC) in Sudan so that Sudan can finally enjoy lasting peace,” he said.

Recently, the authorities offered to mediate between Egypt and Ethiopia in their disagreement over the construction of the Grand Ethiopian Renaissance Dam, and in other situations that include the Tigray conflict.

“By participating in bringing regional peace and stability, South Sudan has demonstrated its ability as a reliable partner in quest for regional and international peace and security,” he said.

“Further, the Republic of South Sudan is contributing one battalion of peacekeeping forces to be part of the East African Forces to bring peace in the eastern Democratic Republic of Congo.

Turning to the war in Ukraine, Mr. Agany pointed to how it has devastated lives in the country and affected the global economy.

“From the moral point of view, the South Sudan Government is calling on Russia and Ukraine to cease all forms of hostilities and resolve the dispute through diplomatic and constructive dialogue to avert further consequences.” 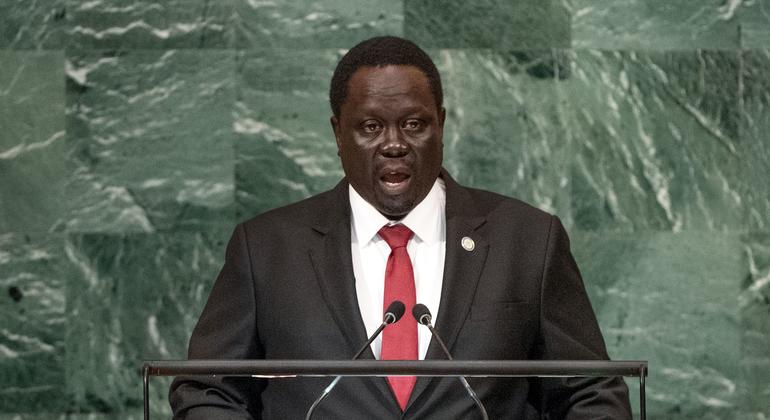