You are here: Home » Regional » The Trump-Russia saga in 200 words

The Trump-Russia saga in 200 words 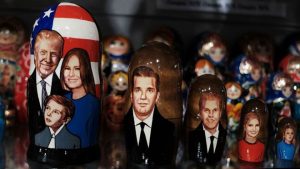 It’s the story that has dominated Donald Trump’s presidency, but it’s complicated. Let’s take a step back.
In summary

US intelligence agencies believe Russia tried to sway the election in favour of Trump and now there are several investigations looking into whether anyone from his campaign helped.

Any evidence?
More and more contacts between his staff and Russia have emerged. Several of these communications were not initially disclosed. The president himself has rejected the allegation that anyone around him colluded with Russia and says the “real” story is leaks.

Do meetings mean collusion?
No, but last week it emerged that the president’s son, Donald Jr, met a Russian lawyer who had “dirt” on Hillary Clinton. An intermediary who set up the meeting claimed the lawyer was working for Moscow, which she – and the Kremlin – deny.

Who else is involved?
Attorney General Jeff Sessions and the president’s son-in-law and aide Jared Kushner are others in the Trump team whose Russian contacts are under scrutiny.

And the president?
Since he fired the man leading one of the investigations, ex-FBI Director James Comey, there are questions whether the president has obstructed justice. Legal experts differ on this.

Like it? Share it!
Abraham and the Angels: Rembrandt at the Frick Collection < Previous
Malawi Leads the Way in Animal Conservation Next >
Recommended stories you may like: