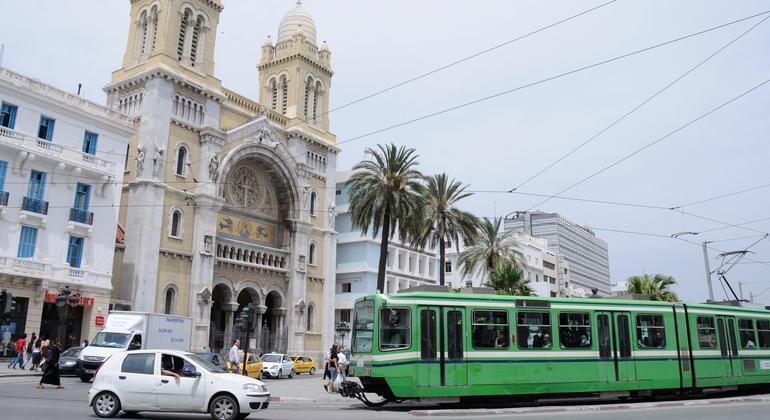 Mr. Bhiri, a parliamentarian with the Ennahdha party, was taken outside his home on 31 December by men in civilian clothes.  No explanation was given or warrant for his arrest was provided.

The moderate Islamist Ennahdha movement has the largest number of seats in Tunisia’s parliament, according to media reports.

Mr. Bhiri, 63, was shuttled to different undisclosed places of detention for several hours and later put under house arrest.  Due to pre-existing health conditions, he was transferred to hospital on 2 January, where he remains.

Although officials have indicated that he is suspected of terrorism-related offences, OHCHR said his lawyers have not been formally informed of any charges against him.

A second unidentified man was also taken away and detained on the same day as Mr. Bhiri, and under similar circumstances.  His location was not known, until 4 January.

“We urge the authorities to either promptly release or properly charge these two men in accordance with due process standards for criminal proceedings,” said Liz Throssell, an OHCHR Spokesperson in Geneva.

The developments have deepened the UN Office’s “already serious concerns” about the deteriorating human rights situation in Tunisia.

Although the men’s families, as well as OHCHR staff in the country, have been able to visit them, Ms. Throssell said “these two incidents echo practices not seen since the Ben Ali era and raise serious questions regarding abduction, enforced disappearance and arbitrary detention.”

President Zine El Abidine Ben Ali, who ruled Tunisia for more than 20 years, was ousted in January 2011, in protests that sparked the Arab spring.

The current President, Kais Saied, suspended parliament last July and assumed all executive functions, in a move opponents branded as a coup.

OHCHR said the actions of Tunisia’s Internal Security Forces have long been a matter of concern, having repeatedly raised the issue in discussions with the authorities over the past decade.

Following the violent dispersal of demonstrators on 1 September, President Saied called for forces to change their practices and act in accordance with the law.  While “a positive step”, the UN office said public commitment to international human rights obligations have yet to be translated into practice.

OHCHR was also concerned about the stifling of dissent in Tunisia, including through improper use of counter-terrorism legislation and increasing use of military courts to try civilians.

Although the President has repeatedly vowed to reform the judiciary, actions must be in line with Tunisia’s international human rights obligations.

OHCHR recalled the “tremendous progress” the country has made over the past decade in promoting human rights, though stressing the importance of preserving these gains.