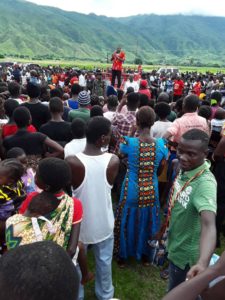 The hard to reach area because of bad road network has been neglected by politicians especially those in government until Chilima visited the place on Sunday.

Driving himself in his Toyota Hilux, Chilima felt the pain himself first hand on how the people of Usisya go through in their every day life.

And the people of Usisya were inspired and immediately turned to Chilima to help them with some of the challenges they are facing.

Speaking at the UTM imbizo on Sunday one of the community members Zoto Siska, said their health centre has been reduced to a mere building which used to be a healthy facility,  due to lack of facilities and equipment for the facility to perform it’s functions satisfactorily.

They asked Chilima to help them as soon as he is elected President of the country on May 21 this year.

“When one is admitted, you are told to bring a lighting bulb,  mosquito net,  and mattress on top of looking for drug money, that’s why we will vote you into power on 21st May, because we believe you are the only true son of Malawi with the welfare of Malawians at heart,”said Zoto.

He wondered why government abandons them like this when they are also Malawians who pay taxes just like everyone else.

Another community member Sunday Mhone complained about the poor state of their only road which is impassable during a good part of the rainy season.

“Lack of proper transportation is a threat to both our lives and livelihood because we can’t access better health services in time of need and we can’t take our commodities which are mostly perishable, to good markets all the because of the poorly road and unreliable boats on the lake” said Mhone.

Meanwhile Chilima has since promised better and modern means of transportation as well as improving their livelihood once voted into power in the  May watershed elections.

“No citizen of this country is supposed to live in such dare situation 54 years after independence.  After we get into power in two months time,  you will have better transport services both water and road because it’s your taxes which will develop this area not me,  I will just help to lead the development,” said Chilima.

Dr.  Chilima who is the first presidential candidate and very high ranking government official, in history to have visited the area by road,  said he had seen the road for himself as he drove all the way to the area and will make sure that next time he comes to the area, people are happy and not afraid anymore to use their own road.

Chilima also said it is the government’s responsibility to ensure better health services for every citizen and the UTM government will live up to that expectation.

On Sunday morning,  Chilima and his wife Mary attended prayers at St Andrews CCAP Church of the Livingstonia Synod.

On his way back from Usisya, he had Imbizos at Bula and Bigha.

Chilima is visiting the northern region and held political rallies and Imbizos in Mzimba and Rumphi on Friday and Saturday respectively.