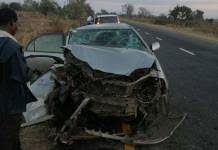 The Catholic Secretariat of the Episcopal Conference of Malawi regrets to announce the death of Reverend Father Andrew Nkhata, Vicar-General of the Diocese of Mangochi.

Fr. Nkhata tragically passed away last night, after being involved in a fatal road accident at Namiasi in Mangochi District. He was later confirmed dead by Mangochi District Hospital. According to postmortem reports, Father Nkhata’s death was the result of multiple injuries that he sustained after the vehicle he was traveling in was involved in a head-on collision with another vehicle.

Meanwhile the Episcopal Conference of Malawi (ECM) released the full program and burial ceremonies as follows:

?On Tuesday, 8th August 2017– At 2:30 pm? the body will leave Mangochi District Hospital Mortuary to Koche-Maldeco Parish where Mass will be celebrated at? 3pm?.

Thereafter the body of the late Fr. Andrew. Khataza will be taken to St Augustine Cathedral and Mass will be conducted ?at 5:30 pm?.

?The burial of late Fr. Andrew Nkhata will take place on Wednesday, 9th August 2017 at 10:00 am?. The formalities include Mass at the St Augustine Cathedral in Mangochi. Thereafter the body late Fr. Nkhata will be taken to the St. Paul Seminary cemetery for burial.

May the soul of Fr. Andrew Nkhata Rest In Peace!

Like it? Share it!
South Africaat the cross roads:Where will our country be tomorrow? < Previous
Bvumbwe Police recovers ADMARC stolen pump gun; five suspects arrested Next >
Recommended stories you may like: