Officials and family members have welcomed Tunisian swimmer Ahmed Hafnaoui at the Tunis airport after winning the final of the men’s 400m freestyle swimming event during the Tokyo 2020 Olympic Games in Tokyo.

The day of Hafnaoui’s coincided with the anniversary of the moment the Tunisian monarchy was abolished in 1957.

“When I saw the flag of my country being raised and I heard the national anthem I had tears in my eyes,” he said afterwards.

“I felt so proud. I dedicate this title to all the Tunisian people.

“You have a champion now!”

His gold, combined with compatriot Ons Jabeur’s eye-catching run to the Wimbledon women’s quarter-finals, has allowed sport to provide a welcome distraction for the hard-pressed Tunisian people confronted by a faltering economy and a Covid health crisis

Jabeur may have lost her first-round match at the Olympics on Sunday — perhaps her Wimbledon exertions took their toll — but she has done her bit off the court too.

Tunisia is facing a record number of coronavirus contaminations with public hospitals facing an unprecedented influx of patients.

Jabeur announced a fortnight ago she was auctioning one of her racquets to help Tunisian hospitals fight Covid-19.

Jabeur, who will add a personal donation to the amount collected during the sale, said the money raised would be used to buy “drugs and medical equipment”.

Jabeur’s long-term goal is for her exploits to inspire more Arabic women, especially North African, to take up tennis.

The success of Hafnaoui, eight years younger than Jabeur, appeared to be as much of a surprise to him as to his rivals and most of those watching.

His Tunis-based coach Jabrane Touili danced up and down the rows of empty seats left empty because of the coronavirus-related ban on spectators.

“I train alone with my coaches, it is difficult but the result speaks for itself,” Hafnaoui said.

The teenager’s basketball player father inspired him to take up swimming.

“He told me to try my hand at swimming because it is good for one’s health and for building up the body,” he said.

“With time I began to gain in confidence. “These last two years I began to win races at Arab and African meetings and further afield like at the French championships.”

Little wonder then that Hafnaoui said his thoughts turned to his parents as he stood on the medal podium.

Before the Games began, Mellouli praised his younger compatriot but there were words of warning for him too — which ring ever more pertinently now.

“I am happy to pass the torch to him,” he told Tunisian radio station IFM in July. “Ayoub (Hafnaoui’s middle name) has had some difficult times.

“He had to give up his studies so he could succeed in swimming.

“He took a risk as regards his future. I hope he will strike a balance between his financial and psychological welfare.” 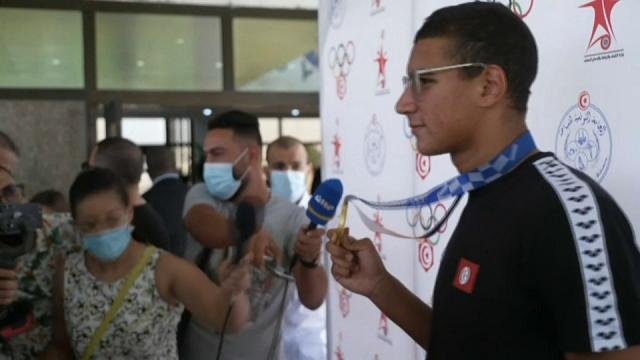 Like it? Share it!
ST. Gideon Orkar: In Memoriam, By Remi Oyeyemi < Previous
Former Malawi lands minister Vuwa Kaunda distances himself from unpaid MK7m legal fees to Mhone Next >
Recommended stories you may like: