You are here: Home » Regional » Man runs 90km marathon to propose to a woman

Man runs 90km marathon to propose to a woman 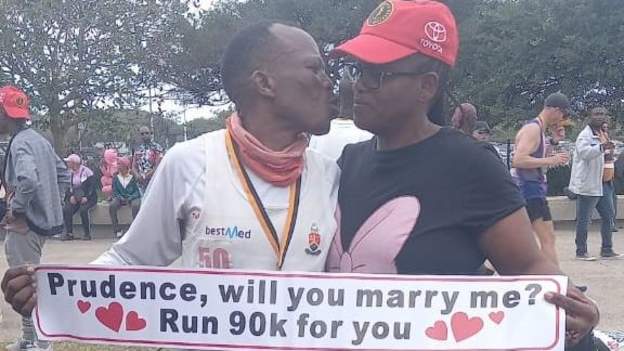 A South African man decided to run a 90km marathon as a sign of his love to a woman he desires to marry.

The 57-year-old man, identified as Joseph Kagiso Ndlovu went the extra mile to prove his love for this woman.

His action has set online users on a frenzy with his action trending on social media.

Joseph Kagiso Ndlovu proposed to the woman named Prudence at the end of the race, holding a banner asking the woman to marry him.

His action as he approached the finish line of the the Comrades Marathon on Sunday in South Africa caught the attention of many.

“Prudence will you marry me? Run 90k for you,” read the banner he held while approaching the finish line.

The things you see at the #ComradesMarathon2022 finish line:

Prudence Dick who was at the race to support Mr Ndlovu said yes to the proposal.

The two have been dating since the beginning of the year and plan to get married sometime next year.

Like it? Share it!
Of being obsessed with Chakwera’s “Tonse Alliance” comic leadership < Previous
Angola elections: ruling party wins, incumbent president re-elected Next >
Recommended stories you may like: