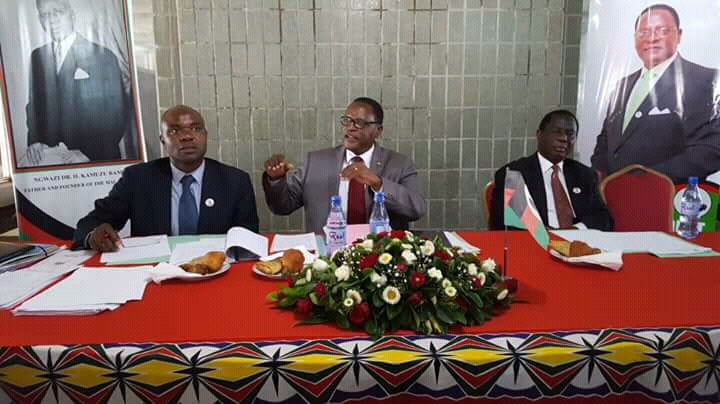 Msowoya who is also Speaker of National Assembly along side the suspended three NEC members will be later called for a disciplinary hearing to hear their side of the story.

The MCP NEC meeting has therefore set April 4 to 8, 2018 as dates for the party’s convention.

This follows the NEC meeting which was held on Sunday afternoon at its headquarters in the capital Lilongwe.

The meeting which was co-chaired by the Party President Lazarus Chakwera and Mkaka held in the absence of key NEC members including SG Kaliwo, Msowoya among others.

Prior to the meeting on Saturday, the seating High Court Judge Chirwa in the commercial city of Blantyre rebuffed an injunction in which Kaliwo wanted to take against the Sunday’s party National Executive Committee (NEC).

MCP SG Kaliwo through his lawyer Kalekeni Kaphale sought the court intervention over the party NEC meeting arguing that it was called without his office acknowledgement.

According to information The Maravi Post Post gathered Kaliwo argued that the Sunday MCP NEC meeting was unconstitutional as it comprise of all NEC members that were elected by 2013 convention plus other appointments the party leader Lazarus Chakwera made as mandated by the same constitution.

But Judge Chirwa quashed the arguments saying MCP NEC was mandated to carry the function of the party that himself (Kaliwo) signed the appointment of the other members into the NEC.

MCP deputy Publicity Secretary Ezekiel Ching’oma was non-committal on the matter but saying the Sunday party NEC meeting was going to take place as planned.

But inside sources within MCP confined this reporter that Kaliwo’s court redress emanated from fears and rumors that alongside party Vice President Richard Msowoya, second deputy president Macdonald Lombola ( who has since denied signing )’ deputy secretary general James Kaunda and treasurer general Tony Kandiero are to be suspended after the NEC meeting for dressing down Chakwera in public.

The development also comes a day after MCP youths movement on Friday petitioned the party’s policy making body—NEC to suspend Party Secretary General, Gustavo Kaliwo, accusing him of sowing divisions and bringing the country’s oldest party into disrepute for his incompetence in failing to show policy direction in the party.

With the Sunday’s NEC resolutions to fire and suspend members just vindicates the fears that prompted SG Kaliwo seeking the court redress though it did not work.

The Maravi Post is yet to get reaction of the four after the NEC verdict.

Kaliwo, a lawyer by profession, has however said he remains MCP secretary general and no one can force him out until the party convention.

Kaliwo together with Msowoya, second deputy president Macdonald Lombola ( who has since denied signing )’ deputy secretary general James Kaunda and treasurer general Tony Kandiero—penned Chakwera to tell him that he was flouting the MCP constitution and going against his own words.

A political commentator at the University of Malawi’s Chancellor College Earnest Thindwa faulted the five for putting their grievances in writing and, according to him, leaking them to the media.