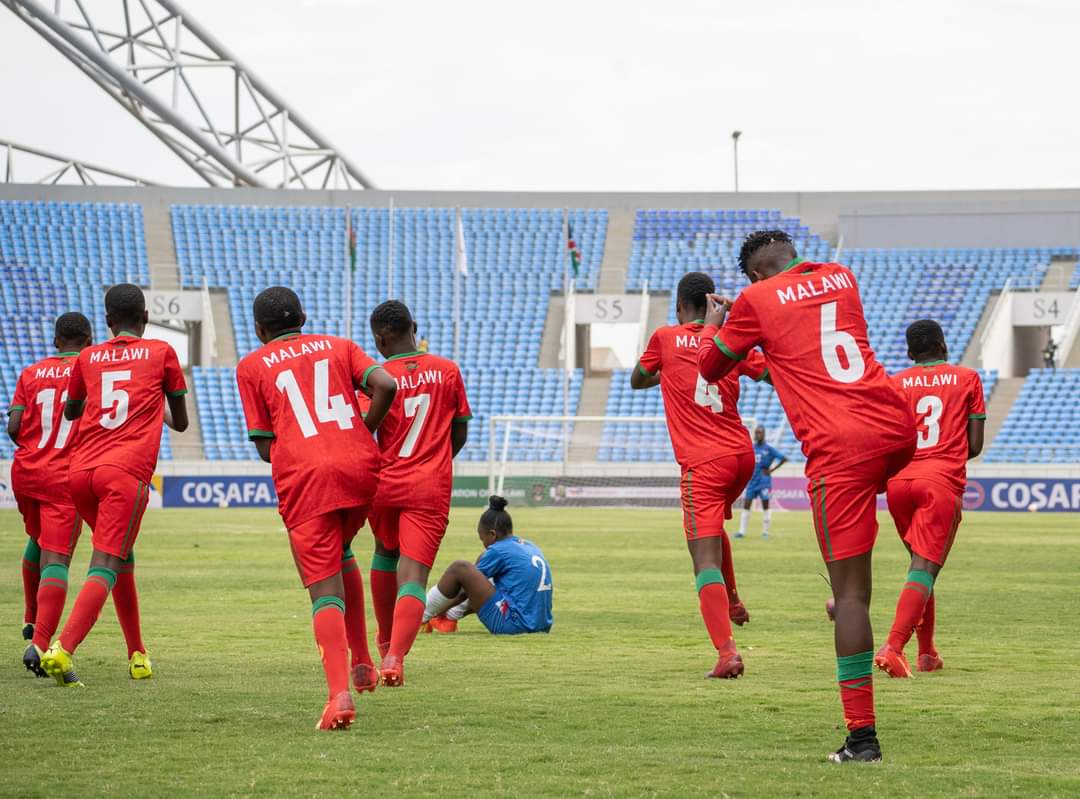 The girls scored goals for fun as they massacred Namibia 12-0 at the magnificent Bingu National Stadium.

The Trevor Kajawa’s side lost in their opening match 1-4 to South Africa two days ago.

Malawi who was on fire especially in the second half scored through Rose Smith Kabzere 5 goals at 23rd,50th,55th,59th and 65th,while Faith Chinzimu netted 4, at 49th,58th,63rd and 82nd with other goals coming from Chikondi Mgodi 53rd minute, Leticia Chinyamula 79th and Annah Baziliyo at 84th minute.

As the Theme of the games which is IGNITING THE AFRICAN DREAM Malawi U-17 girls indeed ignited their own dream by qualifying to the semifinals in the maiden year.

Coach Kajawa was over the moon with the victory and qualification while acknowledging Namibia gave them tough time in the first half.

“In the second half we built confidence and started scoring goals like nobody’s business, I am very much excited defeating Namibia 12-0.

“It wasn’t easy but after that defeat to South Africa we came flatter out. We are meeting Zambia in the semis. We are not afraid”, Kajawa said.

Malawi will battle it out with the COSAFA U17 defending champions Zambia on Wednesday in the semifinals.

The Zambians humiliatated Comoros Island 10-0 to top group B in a game in which Lubasi Pumulo scored a hat trick, Harriet Matipa grabbed a brace.

South Africa takes on Botswana on Thursday from 1830hours.

So far 52 goals have been scored in 6 games of the girls Championship which is being as part of the region 5 games Lilongwe 2022.

The games have been so entertaining and they are just indeed leaving a memorable mark which was the wish of Region 5 Organizing Committee.

In boy’s category which is the TotalErnegies U17 AFCON Algeria 2023 qualifiers,Mozambique lost to South Africa 0-1 courtesy of Siyabonga Mabena.

Lorenzo Hoareau scored a consolation goal for Seychelles from a stunning free kick.

This was the first goal for Seychelles as they lost 11-0 against South Africa in their opener.

28 goals have been scored in boys category from 6 games.

Malawi has already qualified from group A with 4 points following their 2-2 draw against Botswana and a 2-1 victory over Namibia.

South Africa and Zambia qualified from group B with the current 100% record as they have won their first two games.