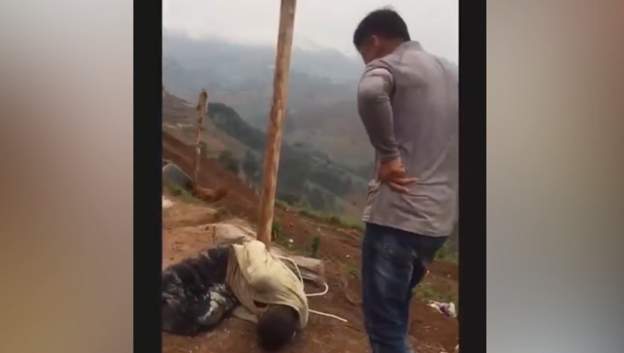 A Chinese man has been jailed for twenty years for beating his employees while they were tied to a tree in Rwanda.

Sun Shujun was sentenced by a Rwandan court after he was put on trial for torture for his action which was captured on video.

He was arrested after the video of his action went viral. A Rwandan man who works for Shujun was also sentenced to 12 years in jail for abetting torture.

The three-minute video went viral in Rwanda in August 2021. The video was taken by angry workers and shared on social media.

The victims of Shujun’s actions were former workers at a mine operated by him in Rutsiro district. They were accused of theft.

During the trial Mr Shujun said he had previously warned workers after his belongings were repeatedly stolen.

According to witnesses Mr Shujun had erected a cross where those suspected of stealing from him were tied and whipped.

The Chinese embassy in Kigali condemned what it called “unlawful acts” in the video, carried out by the Chinese national.

Like it? Share it!
African Development Bank hosts consultations with governments to promote its blueprint to equip Africa’s workforce with in-demand skills < Previous
Russia parries off Ukraine invasion blame for global economic crisis Next >
Latest News From Malawi
Headlines From: The Maravi Post