You are here: Home » Regional » Sudan’s political transition in crisis amid pro-military protests 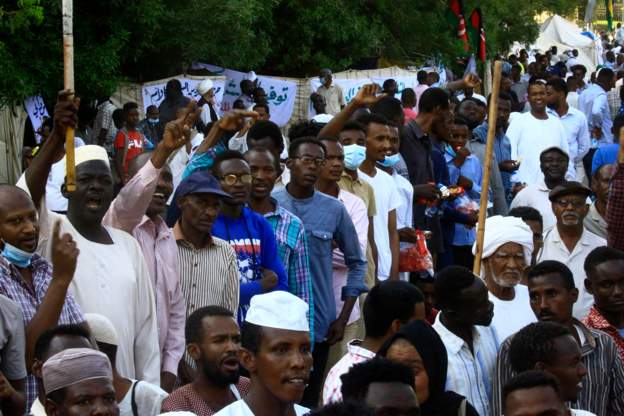 Sudan’s political transition is facing a major crisis amid pro-military protests by some citizens demanding the dissolution of the civilian government.

The pro-military Sudanese protesters held another rally on Sunday, which is a second day of protest.

They gathered outside the presidential palace in central Khartoum demanding the dissolution of the interim government, claiming it has failed politically and economically.

These protests are coming at a time that cracks have emerged among the transitional government ruling the country.

The civilian transitional government was installed following a coup sparked by protests that toppled the three decades of Omar al-Bashir’s regime.


Sudan’s cabinet is to hold an extraordinary meeting on Monday to find a solution to the row between factions of the ruling Forces of Freedom and Change (FFC).

The country’s civilian Prime Minister Abdalla Hamdok has called the current crisis “worst and most dangerous” for the ongoing transition.

Meanwhile pro-government supporters are planning a counter-protest on Thursday to pledge their support for ongoing efforts to restore democracy to Sudan.

The coup plotters were reported to have tried to take over a building housing the state media.

Sudanese officials were said to have taken measures to contain the attempted coup.

Former President Bashir, who had been in power for three decades, was toppled two years ago.

A transitional government made up of the military, civilian representatives and protest groups have been ruling as part of a power-sharing agreement.

“We’re not going back… there are people trying to turn back the hands of time,” said Information Minister Hamza Baloul in a statement read on state TV.

Like it? Share it!
Chakwera optimistic of fixing Malawi’s “Mechanical fault” < Previous
Eswatini transport strike for release of pro-democracy MPs Next >
Latest News From Malawi
Headlines From: The Maravi Post