LILONGWE-(MaraviPost)-The Malawi Congress Party (MCP), a party in Tonse Alliance has fired one of its vocalists Frank Chiwanda for allegedly for contravening Dr. Kamuzu Banda’s “four cornerstones” which are loyalty, discipline, obedience and unity.

MCP’s Secretary General Eisenhower Mkaka has confirmed of the development in a letter dated December 24, 2021 made available to faceofmalawi.

According to the statement, the firing is linked to the recent outbursts against the Government and the party machinery which is contrary to the four cornerstone pillars of the party.

Below is the statement; 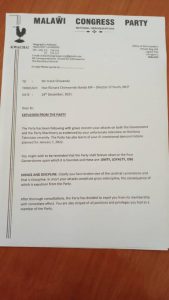 This is undemocratic tendencies in the old party where leaders are idiolised as semi-gods.

Africa has what it takes to feed itself, African Development Bank chief tells G7 development ministers