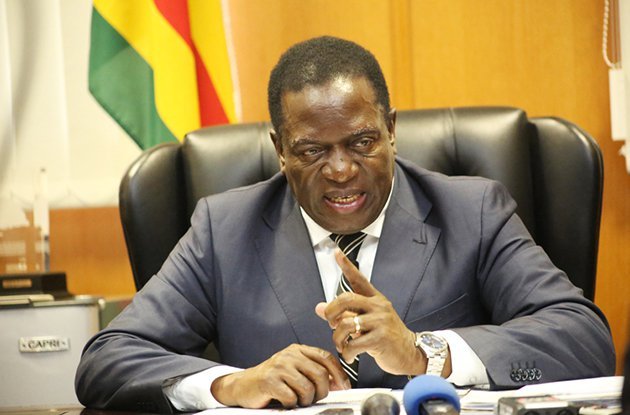 Tensions are gradually intensifying between President Emmerson Mnangagwa and the military clique surrounding him, amid revelations that the army is exerting overbearing influence on the executive.

Accprding to allafrica.com news, official sources say the military is even exercising veto power in some instances, while also influencing the operations of government and other security organs.

Senior government officials told the Zimbabwe Independent this week that the military element in Zanu PF has serious political ambitions, to the extent that they want Mnangagwa to serve one term, if he wins elections, before handing the baton over to Vice-President Constantino Chiwenga, who is also in charge of the ministries of defence and war veterans.

Chiwenga was the commander of the Zimbabwe Defence Forces when the military embarked on Operation Restore Legacy in November last year. The operation — widely seen as a coup — catapulted Mnangagwa to high office, ending former president Robert Mugabe’s 37-year grip on power.

Chiwenga was then appointed vice-president, while retired Lieutenant-General Sibusiso Moyo, who announced the military intervention on state television, was appointed Foreign Affairs minister.

Government officials say the military is now exerting pressure on the executive, making the civilian component of government uncomfortable in some instances.

“Tensions and mistrust are certainly building up in government, although things may appear rosy on the surface. The feeling is that the military clique is making too many demands both in government and the party (Zanu PF).

“The military has been so strong that they have veto power in some cases. For instance, Mnangagwa had initially appointed Oppah Muchinguri as one of his deputies, but the military demanded that the position be given to Chiwenga, who also insisted on being in charge of defence,” an official said

“It was the same case with Victor Matemadanda. He was earmarked to be Zanu PF’s national commissar, but the military demanded that one of the senior commanders secures the post, resulting in Rugeje’s appointment. The military feels that the civilian wing of the party is not competent enough to run the commissariat, hence Rugeje is running it with the assistance of Ministry of Defence officials and the army.”

Chiwenga was in 2015 awarded a doctorate by the University of KwaZulu-Natal’s College of Humanities, fuelling speculation that he was preparing for a career in politics and possibly a future role in leadership.

The Independent has on several occasions in the past reported that he was angling for political office, including in 2011, when he attained a master’s degree in international relations from the University of Zimbabwe.

Government officials say Mnangagwa has not been able to contain the military as he does not have an electoral mandate, and actually owes his ascendancy to military commanders.

“In addition, Mnangagwa in reality does not have control of the army as things stand. The army is still loyal to Chiwenga, who is also effectively Minister of Defence.

Chiwenga has been pushing for the army to receive preferential treatment and dominance compared to other security forces and civil servants, and it appears he is winning on that front,” an official said.

The Independent last week reported that the expulsion of high-ranking Central Intelligence Organisation (CIO) officers had escalated tensions in the security forces at a time some operatives tortured during the military coup were demanding compensation for injury and trauma.

The army was vicious on people netted during Operation Restore Legacy, particularly the police and CIO agents, further straining relations which had deteriorated due to differences over the protracted Zanu PF succession.