At least 23 people have been killed as tornadoes struck Lee County in eastern Alabama, authorities say.

County Sheriff Jay Jones said there had been “catastrophic” damage and there were fears more bodies would be found. Dozens are thought to have been hurt.

According to BBC, rescue efforts have been halted until dawn due to the danger of searching in the dark.

The most devastating tornadoes struck the area around Beauregard, carving a path at least half a mile (0.8km) wide.

The National Weather Service (NWS) made a classification of at least EF-3 – meaning winds of up to 165mph (266km/h).

It warned people to “stay out of damaged areas so first responders could do their job”.

Where have the tornadoes struck?

The area around Beauregard, about 60 miles (95km) east of Alabama’s state capital, Montgomery, appears to have borne the brunt. The tornadoes there struck at about 14:00 (20:00 GMT) on Sunday.

Sheriff Jones said some homes had been reduced to slabs. Authorities fear the death toll could rise.

Local resident Scott Fillmer said: “Everything just kind of went dark, when it was almost like night outside. And it’s that old cliché that it sounds like a freight train coming, well that’s what it sounded like.”

Residents of Smiths Station told local TV they had seen businesses destroyed there. A large bar called the Buck Wild Saloon had had its roof torn off.

Sheriff Jones said: “The challenge is the sheer volume of the debris where all the homes were located. It’s the most I’ve seen that I can recall.”

Tornadoes were also reported in Walton County and Cairo in northern Florida.

What do we know about the casualties?

All of the deaths so far have been in Lee County. Authorities say they are still working to identify the victims and the injured.

One of the dead in Beauregard was an eight year old, family members said.

“We’ve never had a mass fatality situation, that I can remember, like this in my lifetime,” Lee County coroner Bill Harris said.

Alabama meteorologist Eric Snitil tweeted that there were more deaths in Lee County in one day due to a tornado than in the entirety of the US in 2018.

East Alabama Medical Center said it was treating more than 40 people injured by the extreme weather, and was expecting more.

Several people were reported hurt in Talbotton in Georgia, though not seriously.

What was the damage?

PowerOutage.US says more than 2,000 customers remain without electricity across affected areas in Alabama, most of them in Lee County, and another 7,000 in western Georgia.

Cold weather is forecast for the region after the tornadoes, with temperatures predicted to drop to near freezing. 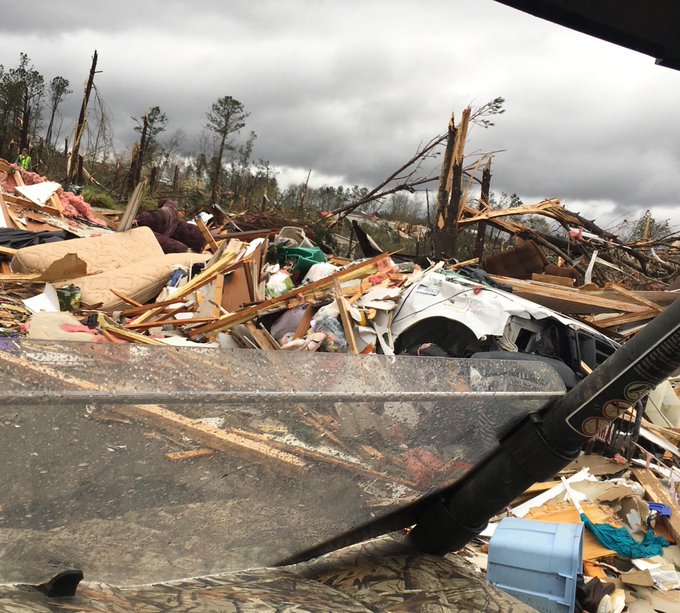 The National Weather Service said it would send three survey teams to assess the damage caused by tornadoes across Alabama on Monday.

The extreme weather also tore down trees and destroyed homes in western Georgia.

What’s been the reaction?

Alabama Governor Kay Ivey posted on Twitter to warn residents there could be more extreme weather to come.

“Our hearts go out to those who lost their lives in the storms that hit Lee County today,” she wrote.

And Apple CEO Tim Cook, who was born in Mobile in the southwest of the state, said he was “devastated” by the news, saying Lee County was “a place close to my heart”.

Are tornadoes expected at this time of year?

This series has occurred earlier than the traditional peak season for tornadoes, which runs from April to June, when more than half of the year’s tornadoes generally strike.

Weather systems are more conducive in these months. Warm air flows north from the Gulf of Mexico at the same time as storm systems are propelled into the south and mid-west by a southward dip in the jet stream.

These latest tornadoes appear to have carried the deadliest toll since 35 people were killed in Arkansas and Mississippi in April 2014.

A “super outbreak” of tornadoes across a swathe of the US in April 2011 killed more than 300 people.

Lloyd M’bwanahttps://www.maravipost.com
I'm a Lilongwe University of Agriculture and Natural Resource (LUANAR)'s Environmental Science graduate (Malawi) and UK's ICM Journalism and Media studies scholar. I have been The Malawi Country Manager and duty editor for the Maravi Post for the past Three Years. My duty editor’s job is to ensure that the news is covered properly, that it is delivered on time, and that it is created to the standards set out in the editorial guidelines of the Maravi Post. I also decide most of what the user will or will not see. And those users will be clicking on the website expecting to see what their trusted news. Organisation has to say on an issue. I started as a senior Reporter with the Maravi Post over a 6 years ago. When I have time, I do field reporting as well.
RELATED ARTICLES
Regional