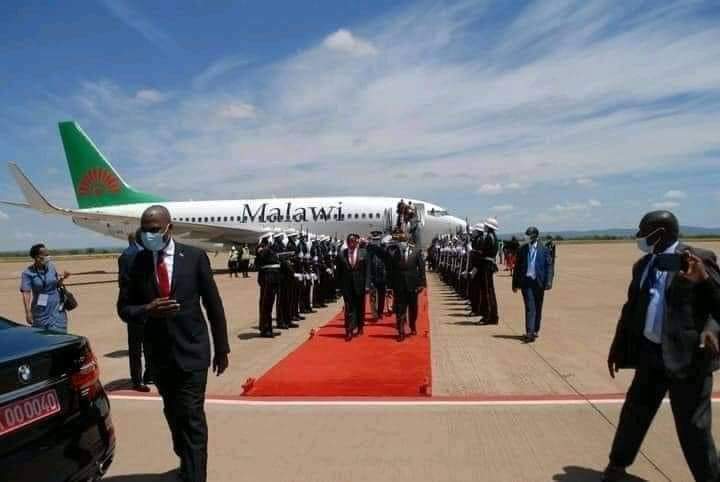 First Mkaka rushed to the inbox of an influential social media activist Onjezani Kenani and supplied him with a travel itinerary which showed that he flew to Somaliland commercial using Ethiopian Airlines.

But he is now cursing the one who took his picture at Hargeisa International Airport in Somaliland on his arrival because the damn Malawian Airline, which does not fly to Somaliland, is clearly visible in the background as Mkaka is seen going to embark in an official Somaliland BMW vehicle out of the airport.

Mkaka is failing to explain how the Malawian Airline plane took him and President Lazarus Chakwera advisor Martin Tom and William Bambi from Ministry of Foreign Affairs to Somaliland when the airline does not have an official route to that country.

Sources said Mkaka is receiving a lot of pressure from Chakwera to explain the charter flight and the minister is putting pressure on Malawian Airlines to come up with a statement to deny that Mkaka chartered their only plane.

We are not taking down the stories.

Mkaka media team tried to blind the nation by using a different litenary program for a staged Ethiopians Airlines ticket as attached below.

Several new sites in Somaliland have also published the pictures of Mkaka arriving in the chartered plane and other pictures of him interacting with Somaliland President Muse Bihi Abdi and also Vice President Abdirahman Abdullahi Ismail and other top Somaliland government officials.

Sources revealed that Mkaka used the charter plane to bring millions of US dollars into the country easily than if he were to fly commercial.