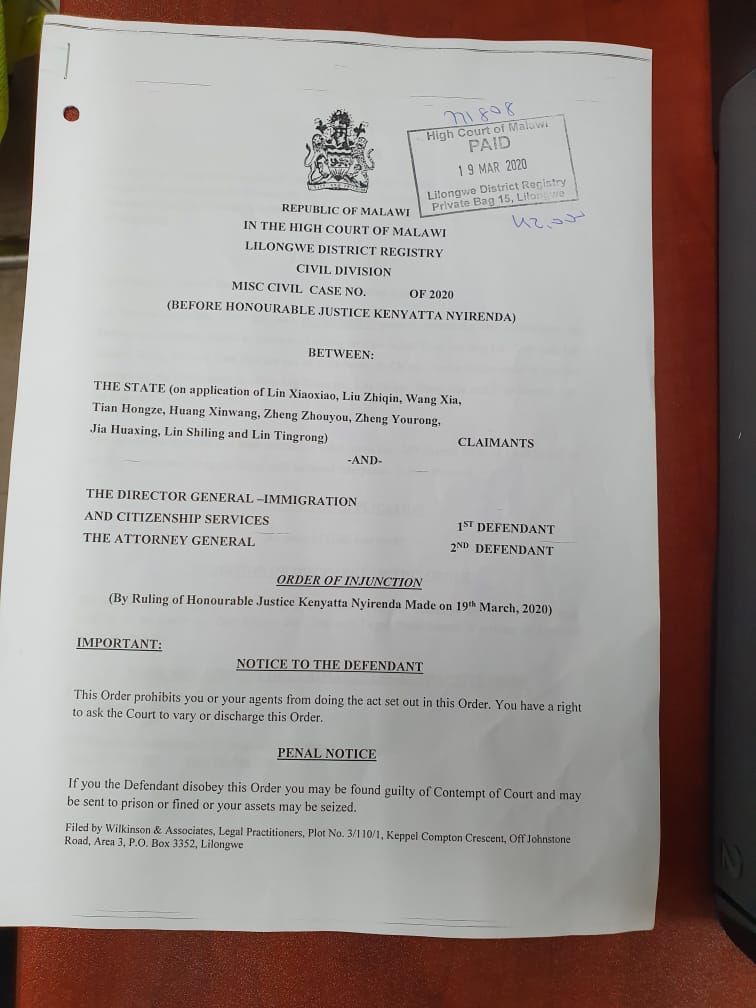 LILONGWE-(MaraviPost)-As coronavirus sweeps through the world to a devastating effect, the High Court in Malawi has seen it fit to expose millions of the country’s souls to the virus by stopping the Immigration Department from deporting or at least quarantining four Chinese nationals.

Coronavirus originated in China where is has brought the whole city of Wuhan to its knees and battered China very badly.

The virus has rapidly spread to the rest of the world, with the hardest hit Italy registering more than 600 deaths in one day, two days ago.

In Africa, more than 30 countries have registered a combined total of over 150 cases so far.

And the infection is rampaging on forcing governments to implement measures to protect their people.

Here in Malawi, government has been implementing strict controls at ports of entry.

Now the courts seem bent on fighting against protecting Malawians from the virus.

On Friday, the High Court in Lilongwe stopped the Immigration Department from deporting or at least quarantining four Chinese nationals by granting them a dubious injunction.

It was a dubious injunction because judge Kenyatta Nyirenda granted it without hearing from the Immigration Department and Attorney General who are respondents in the case, according to Nation Online.

The order also stopped the Immigration Department from quarantining them for 14 days as health experts recommend. They only stayed in quarantine for 2 days before being let out into the Malawi crowds.

According to Nation, the four Chinese were part of the 14 from China who arrived in the country through Kamuzu International Airport.

At the airport, the Immigration Department immediately deported 10 of them as they had return tickets. One of the measures being implemented by governments around the world is to bar entry of those from high risk countries.

These four did not have tickets and the authorities detained them for them to process their return tickets.

Instead of processing their return, a Lilongwe-based law firm, Wilkins & Associates, rushed to the court and obtained an injunction against the Immigration.

The injunction forced the department to remove the four from quarantine and allow them entry into Malawi.

Nyirenda had warned the authorities that they risk being imprisoned or their assets seized should they defy his order.

According to Nation story posted on its website and dated 21 March 2020, Nyirenda granted the injunction without hearing from Director General of Immigration or from Attorney General who are respondents in the case.

He further ordered that should the respondents wish to vary or discharge the order, they can only do so after notifying the lawyers of the Chinese nationals 48 hours in advance.

Malawi has not yet registered a coronavirus case. However, to protect the nation from the virus which has already hit neighbouring Zambia and Tanzania, President Peter Mutharika has declared a State of Disaster which comes with a raft of measures.

The court order effectively undermines those measures, risking millions of lives to the fast spreading disease.