Mugabe, Gaddaffi, Kabila in top six of former African leaders who were considered as dictators 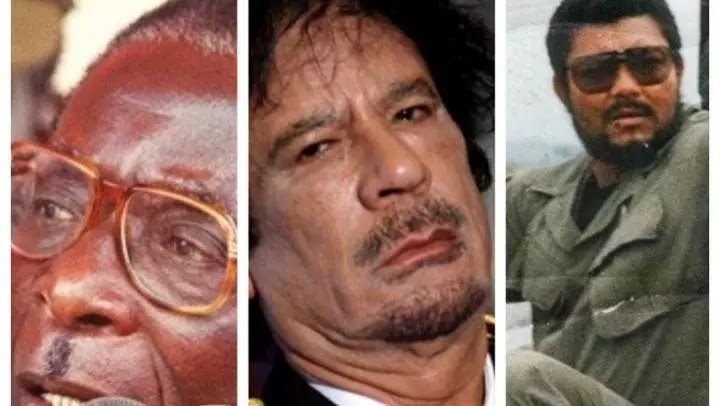 Mugabe, Gaddafi some of notorious warlords in Africa

LILONGWE-(MaraviPost)-Some came to their position with limited experience hence, the decline in morale and discipline caused by bad policies, eroded professional standards and ethics and weakened the system of governance.

Throughout Africa, there has been an urgent desire among various people and government for unity, justice, peace, and stability.

The problem which troubles Africans most is the failure of political leadership.

Like most other countries in the world, Africa has had its fair share of leaders that will go a little mad with the power and turn into tyrants.

Here is a list of 6 leaders who eventually turned into tyrants.

Idi Amin Dada was a Ugandan military officer who served as the President of Uganda from 1971 to 1979.

Popularly known as the “Butcher of Uganda”, he is considered one of the most brutal despots in world history.

In 1946, he joined the King’s African Rifles of the British Colonial Army as a cook.

He rose to the rank of lieutenant, taking part in British actions against Somali rebels in the Shifta War and then the Mau Mau rebels in Kenya.

Uganda gained independence from the United Kingdom in 1962, and Amin remained in the armed forces, rising to the position of major and being appointed Commander of the Army in 1965.

He became aware that Ugandan President Milton Obote was planning to arrest him for misappropriating army funds, so he launched a military coup in 1971 and declared himself President.

Robert Mugabe, who died aged 95, used repression and fear to hold on to power in Zimbabwe for 37 years until he was finally ousted when his previously loyal military generals turned against him.

After his humiliating fall from office in November 2017, his phenomenal physical stamina seeped away rapidly.

Once touted internationally as the hope of his nation, Mugabe left the office with a grim legacy, after waging a campaign of oppression and violence to maintain power and driving into poverty a country once known as the breadbasket of southern Africa.

First heralded as a liberator who rid the former British colony Rhodesia of white-minority rule, Robert Gabriel Mugabe will instead be remembered as a despot who crushed political dissent and ruined the national economy.

The former political prisoner turned rebel leader swept to power in the 1980 elections after a growing insurgency and economic sanctions forced the Rhodesian government to the negotiating table.

In-office, he initially won international plaudits for his declared policy of racial reconciliation and for extending improved education and health services to the black majority.

He was was a Guinean political leader who was the first President of Guinea, serving from 1958 until his death in 1984.

Touré was among the primary Guinean nationalists involved in gaining independence of the country from France.

He was elected unopposed to four seven-year terms in the absence of any legal opposition. Under his rule, many people were killed and imprisoned including at the notorious Camp Boiro.

Domestically, Sékou Touré pursued socialist economic policies, including nationalizations of banks, energy, and transportation; in foreign affairs, he joined the Non-Aligned Movement and developed very close relations with Mao Zedong and the People’s Republic of China.

He died while held in exile in Gabon.

He is a former military leader and politician who ruled the country from 1981 to 2001 and also for a brief period in 1979.

He led a military junta until 1992 and then served two terms as the democratically elected President.

Rawlings initially came to power in Ghana as a flight lieutenant of the Ghana Air Force following a coup d’état in 1979 and, after initially handing power over to a civilian government, took back control of the country on 31 December 1981 as the Chairman of the Provisional National Defence Council.

In 1992, Rawlings resigned from the military, founded the National Democratic Congress, and became the first President of the Fourth Republic.

After two terms in office, the limit according to the Ghanaian Constitution, Rawlings endorsed his vice-president John Atta Mills [late] as a presidential candidate in 2000.

He was a Congolese revolutionary and politician who served as the third President of the Democratic Republic of the Congo from May 17, 1997, when he overthrew Mobutu Sese Seko, until his assassination by one of his bodyguards on January 16, 2001.

Kabila proclaimed himself president, suspended the Constitution and changed the name of the country from Zaire to the Democratic Republic of the Congo — the country’s official name from 1964 to 1971.

He made his grand entrance into Kinshasa on 20 May and was sworn in on 31 May, officially commencing his term as president.

Kabila had been a committed Marxist, but his policies at this point were a mix of capitalism and socialism.

He declared that elections would not be held for two years since it would take him at least that long to restore order.

Kabila was shot and killed in his office on 16 January 2001.

Known as Colonel Gaddafi, he was a Libyan revolutionary, politician, and political theorist.

He governed Libya as Revolutionary Chairman of the Libyan Arab Republic from 1969 to 1977.

Within the military, he founded a revolutionary group which deposed the Western-backed Senussi monarchy of Idris in a 1969 coup.

Having taken power, Gaddafi converted Libya into a republic governed by his Revolutionary Command Council.

An Islamic modernist, he introduced sharia as the basis for the legal system and promoted “Islamic socialism”.

With a group of loyal cadres, in 1964 Gaddafi founded the Central Committee of the Free Officers Movement, a revolutionary group named after Nasser’s Egyptian predecessor.

Led by Gaddafi, they met clandestinely and were organized into a clandestine cell system, offering their salaries into a single fund.

He ruled Libya for 42 years.