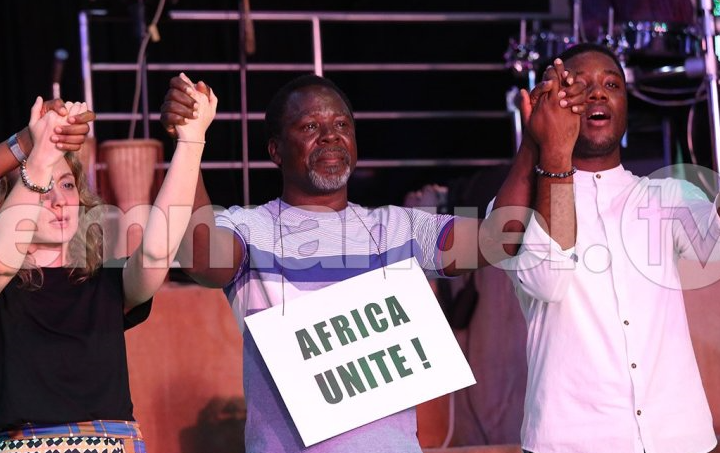 Pastor T.B. Joshua broke down in tears during his church service on Sunday 8thSeptember 2019 whilst a song he composed calling for African unity was being sung.

This comes in the wake of the recent eruption of xenophobic violence in South Africa, which has dominated the news throughout Africa throughout the week.

Unconventionally, Joshua did not preach any sermon during the service but rather joined the worship team ‘on stage’ as they led the congregation in a stirring rendition of a song the cleric composed titled, ‘Africa Unite’.

The lyrics stress that no African country is self-sufficient and calls for an end to the violence and lawlessness witnessed in South Africa.

According to Joshua: “We need each other; we need one another to grow. Africa unite. Dear Africans, we should not let other fellow Africans feel unwelcome to our countries.”

Joshua’s tearful appearance during the song shocked his followers as the cleric is usually not known for outward displays of emotion.[embedyt] https://www.youtube.com/watch?v=To-u-_xmjEw[/embedyt]

Ihechukwu Njoku
Ihechukwu Njoku is a freelance journalist based in Lagos, Nigeria who specialises in penning stories related to religion.
RELATED ARTICLES
Religion