HomeLifestyleSHOCKING!! How Prophet T.B Joshua met his wife and proposed to her...
LifestyleRegionalTop News

SHOCKING!! How Prophet T.B Joshua met his wife and proposed to her 45 minutes later 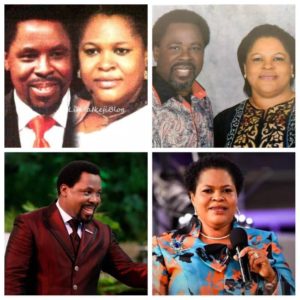 How Prophet T.B Joshua met his wife and proposed to her 45 minutes later

Prophet TB Joshua is arguably the most controversial pastor in Nigeria and little is known of his love life and how he met, wooed his wife.

According to the wife in an interview, The Man Of God proposed to her 45 minutes after they met. That sounds strange right?

The popular Prophet has a very beautiful wife whose name is Evelyn Joshua and they got married in 1990. The wife narrated how the Prophet wooed her. Hear her out:

Twenty three years ago, I visited a sister somewhere at Ikotun-Egbe, and, then they were talking about a particular man, a prophet to be precise. It was a kind of meeting to be precise. And it’s like everybody in that gathering, or at least half of the people in the room, had actually visited him.

So, they were saying a lot of good things about him. I was thrilled. At the end of the whole thing, I called a sister outside and asked whether she could take me to the prophet. I didn’t ask to go there out of curiosity. I actually needed a guide at that point in time.

And before then, you had not told him anything about yourself?

No, we were just looking at each other until he, at a time, wrote my name on the piece of paper. So, we started talking. He told me a lot of things about myself, both things that I knew, and those that I never knew.

I was shocked. He told me about my family, about my past, my present and my future. Altogether, we spent about 45 minutes. At the end of the whole thing, he spoke to me in Yoruba and said: Joo ma binu o.

Just like that. It was strange, but that gives us an insight into what the Scripture says that the Spirit testifies with our spirit that we are God’s children. I think that was it. That was how I met him. Some months later, I asked him why he thought it was right seeing a lady for the first time and going on to propose to her. He said he had seen me four days before that very day.