HomeRegionalThey will create the virus, pretend and sell the antidotes - Muammar...
Regional

They will create the virus, pretend and sell the antidotes – Muammar Gaddafi 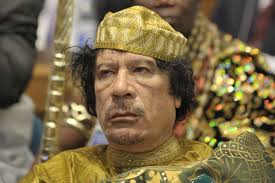 The advent of the coronavirus has seen a lot of blame-games between the United States of America and China. The Chinese are blaming America for the spread of the virus. The spokesman for China’s foreign ministry, Zhao Lijian, tweeted that “it might be the US army” that brought the coronavirus to China whilst Donald Trump, President of the United States also constantly refer to COVID-19 as a “Chinese Virus”.

In the wake of this back and forth, EYEGAMBIA’s research team came across a very strong assertion made by Muammar Mohammed Abu Minyar Gaddafi, a former Revolutionary Libyan President and Pan-Africanist.

In a speech delivered during his prime years of leadership, Gaddafi asserted that there are people who specialize in creating health problems just to make money, irrespective of the danger it poses to human existence.

According to him, “they will create the virus themselves and they will sell the antidotes afterwards, pretending to take their time to find the solution when they already have it.”

This moment of COVID-19 the pandemic spreading across and killing many people coupled with the emerging accusations is the right time to start a conversation on these thoughts of Gaddafi, especially when the virus has started spreading in Africa.

Colonel Gaddafi has always been that leader who finds it very difficult to believe in the truthfulness of a people who once decided to share and evade the territories of Africa, loot resources to build their nation and brutalize its people in addition.

Known to be very protective of the African culture, a promoter of African unity and a strong critic of foreign ideologies and the manner and strategies with which the powers manipulate the world, He has never held back on his words when speaking against social ills. Many of the things Gaddafi use to be critical about in the past, most of which were ignored seem to be manifesting today.

Gaddafi may be far gone but his thoughts are still relevant today. What do you make of his view?