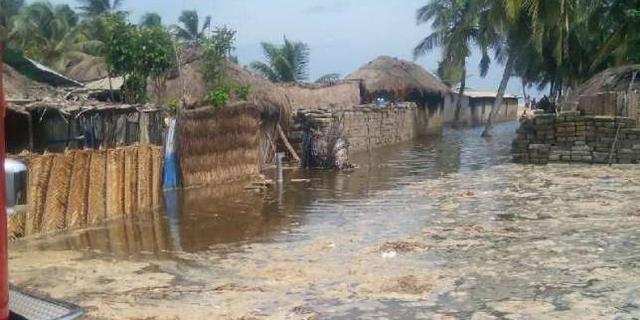 Hundreds of people in Ghana’s Volta Region have been rendered homeless after tidal waves swept through their homes.

Most of the victims mainly children and women in in the Keta municipality, had their homes destroyed by the tidal waves.

They have since Sunday been left stranded as the waves destroyed schools and churches.

For months now, the sea erosion in these coastal communities has intensified, with experts attributing the situation to climate change.

Many of the victims have described the situation as unbearable and want immediate intervention from the government.

“We are homeless and this has been a worry to us for years now, we need the government’s urgent attention,” the residents said.

In some of the affected areas, the tidal waves unearthed corpses as graves were not spared. Community leaders have been forced to re-burry exposed corpses to avoid contamination.

The development has also been blamed on delays in completing a sea defence project by the government of Ghana.

Ghana’s Minister for Works and Housing, Francis Asenso-Boakye, has disclosed that the Finance Ministry will allocate funds for the construction of the second phase of a sea defence wall in the area.


According to Mr. Asenso-Boakye, the completion of works under the second phase of the project is expected to cover a minimum coastal stretch of 8km.