Malawi: Eight injured in a chieftaincy wrangle in Mzimba 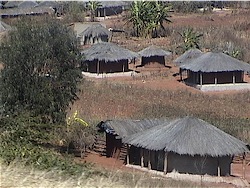 MZIMBA-(MaraviPost)-Eight people have been injured in a chieftaincy wrangle that ensued on Friday at Senior Chief Mzikuola in Mzimba.

According to Chief Chindiku Mkandawire, the misunderstanding took place at Mwanoka Village  where a Mr Masawani Jere who belongs to one of the camps  that are fighting for the chieftaincy wanted to be part of a social gathering uninvited; a development which did not go down well with Mr Khetwayo Jere who says Masawani Jere is not the right heir to the throne.

After an exchange of words at length,  a fierce battle between the two camps ensued which led to the injury of eight people who were involved in the same.

Their injures ranged from deep cuts of machetes and axes to dislocation of some body parts.

The victims were instantly taken to Mzimba District Hospital where they are currently receiving medical treatment.

Meanwhile, Spokesperson for Mzimba Police Station Botha,  has confirmed the arrest of  Masawani Jere who was released on bail few hours later.

However, the police have indicated to effect more arrests after a thorough investigation.

Richard Kayendahttps://www.maravipost.com
I hold a bachelor's degree in languages obtained from Mzuzu University. Since 2016, I have been working for Maravi Post as a reporter of local news; particularly from the Northern Region of Malawi. My main news areas are politics, business, sports and many more. Besides reporting, I also write news analyses on current affairs just to share informed opinions on news that matter in Malawi. By now I have a five year practical experience in online news reporting and I look forward to growing more professionally while raising the bar of Maravi Post; in order to make it a household name, as we keep our readership informed, edutained and updated on a daily basis.
RELATED ARTICLES
Development