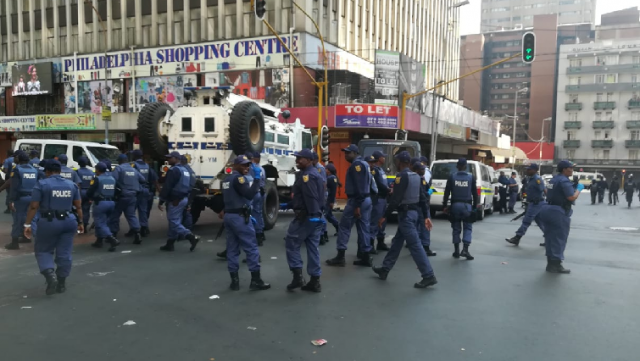 JOHANNESBURG-(MaraviPost)-The South Africa Government Police have confirmed that a Malawian man has died while authorities were conducting raids in the Johannesburg CBD.

Police said that a man died after falling six stories to his death in Hillbrow on Wednesday night.

Hasan Daud said that his brother, Mausah Daud, fled to the bathroom and climbed out of a small window. His body was then found six floors below.

“I told him no to run away but he was scared of the police and he jumped.”

According to SABC NEWS online, Johannesburg Metro Police Department (JMPD) spokesperson Wayne Minnaar said that they were looking into the incident.

“The reason why they ran will be investigated.”

Police have come under fire after being accused of targeting foreign nationals in the raids.

The EFF has accused the government of sponsoring a “war” on foreign nationals from other African countries.

“We condemn it as a reactionary and shortsighted self-hate driven mass violence against our own. Had it been white people who were harassed by police in mass arrests the whole world would have already called it out for what it is: human rights violation. However, black lives do not matter even for a black government like in South Africa,” said party spokesman Mbuyiseni Ndlozi.

“It is a fact that most black people who have to deal with the police and home affairs officials regarding immigration documentation are met with systematised corruption: they are forced to bribe SAPS, custom duty officials or JMPD.

“It is also impossible to attain legal documents on anything from the South African government if you are a black foreign national. This is because the illegality of foreign nationals allows government officials to continue benefiting from corruption.”