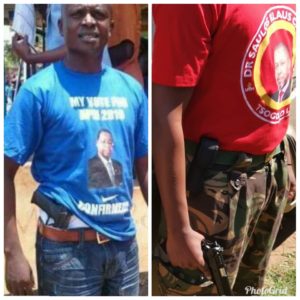 BLANTYRE-(MaraviPost)-Busted! Democratic Progressive Party (DPP) cadet Noel Kaiya has been exposed as the person who dressed in a UTM T-shirt and Malawi Army combat gear exposing a pistol gun to implicate UTM party in violent demonstrations and its relationship with Malawi Army soldiers.

We can reveal that Kaiya, who has a habit of exposing pistols in public places while in full DPP attire, initially refused to pull the stunt as it got him arrested last time.

But at the insistence of cabinet minister Ben Phiri who also uses Kaiya as a pimp, Kaiya agreed to pull the stunt but on condition that he does not show his face.

Immediately Phiri organized a t shirt and some military gear to give Kaiya and have the picture taken without exposing Kaiya’s face.

“Noel was not into the idea but was forced by Ben Phiri. Last time he posed with a pistol on his torso he got arrested for it and he did not want a repeat of that,” said a close friend of Noel who we are protecting his identity.

“The guy in a UTM t shirt is my friend Noel Kaiya. I was there when this picture was being taken and I know who took that picture, ” he said.

The idea, according to Kaiya’s friend was to ‘spin’ the story that it is actually UTM which is armed and is perpetrating violence in the demonstrations and has a strange relationship with some Malawi Army soldiers.

“I am coming out to reveal this because I feel my friend is being used and cannot stand up for himself.  I have spoken with him before but it looks like he is enjoying the money that Ben Phiri gives him,” said Kaiya’s buddy.

“For you to know that this was a well calculated move, that picture was first shared by DPP cadets led by Bob Chimkango,” he revealed.

Our investigations also found out that indeed the picture was first shared by Chimkango to a WhatsApp group for DPP cadets.

Meanwhile, Malawi Army officials are said to have been ‘locating’ Kaiya to ‘ask him a few questions’.