The most astonishing thing about Professor Arthur Peter Mutharika right now is probably his refusal or failure to accept that in as far as the past May elections are concerned, he is only an “Acting President”, yet to be truly confirmed by either the constitutional court, or the people of Malawi at large.

This failure to acknowledge the precariousness of his position is reflected in two very obvious observations. First, he hides away silently in the State House hoping that the public uproar about the perceived unconstitutionality and illegitimacy of his presidency as expressed through protests and demonstrations will all eventually go away. Secondly, in the rare occasions that he has graced any public occasion, he makes statements that suggest total disregard and a lack of concern and appreciation of the public mood and the need for a leader to take the situation in hand and bring it under control.

Back when he was a minister in his late brother Bingu’s administration, this was always his way of dealing with difficult situations. During the academic freedom impasse when he was minister of education, Professor Peter Mutharika was nowhere to be seen as the nation grappled with that particular crisis. It had to take the intervention of his president brother to bail him out and end it.

The trend continued even when, during the Joyce Banda administration, he found himself on the side of the opposition. When there were matters that needed to be dealt with and issues that the electorate expected the opposition to address, Professor APM again fled to the USA where he enjoyed another extended holiday to the point that the DPP as a party almost went into a leadership crisis wondering whether their leader was coming back or not. Incidentally on this particular point, back then in November 2013, I took up the responsibility of writing an article that reminded the runaway professor of his leadership responsibilities; that he had the expectations of the DPP and of the nation on his shoulders and that he needed to show leadership and not run away from crisis situations. I have been told he took my rebuke and advice badly and always reminds those close to him that I was impertinent and disrespectful with that article.

You only need to reflect on this background then for you to see why Mutharika’s current behavior in a nation’s hour of crisis and need for leadership is not too surprising. 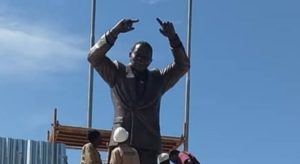 Of course, we still have the right to expect more and better. My own thinking and expectation were that in spite of Mutharika’s record of absconding every tense leadership responsibility that has ever been placed on his shoulders, he would rise up to the challenge this time and make a last stand that would erase all his past failures and lift him up to the stature held by his brother Bingu wa Mutharika or that of Hastings Kamuzu Banda.

I am amazed that oblivious of the fact that his leadership placed in the balance has continually been found wanting, as his last stand, Mutharika has chosen the path of alienation and adopted an approach that will only result in increased popular disapproval and even hatred of his leadership instead of adopting a statesmanlike approach that could unite the country and help him leave a golden legacy.

Standing in as a president in an acting capacity as he does, and looking at the state of public displeasure, I do not believe that it helps the situation for Mutharika to be fanning the flames of popular anger by making statements that order violence and force against protesters, or statements that sound like he is totally immune to public feeling: “I am your president whether you like it or not, whether my presidency is constitutional or not, and whether I legitimately hold this office of not. Deal with it”. This seems to be the approach that Mutharika has adopted as his last stand. In my view this approach is toxic and dangerous and could lead the nation down an unprecedent path of riots and even civil war as public frustration and anger goes unchecked and unaddressed by the leadership- even as temporary as that leadership may be.

I am convinced that Mutharika’s last stand (I call it his last stand because it is his last opportunity to clean up his legacy and rescue some modicum of decency) should be one of compromise and statesmanship.

Mutharika’s last stand needs to be an effort at contact and dialogue, an acceptance of the fact that his presidency has no mandate unless and until it is accepted by the majority of Malawians through the courts and in the public eye generally, and look at ways in which he can mend bridges and restore public confidence and trust in his leadership.

Now is not the time to make his last stand a fight with protestors and demonstrators, and those calling for electoral justice. Even Mutharika himself conceded in a public rally that the election was messy and that some votes were rigged. How then can he think that his presidency is fully legitimate and choose to do nothing about the current condition of the country other than order those loyal to him to persecute those seeking to correct the electoral errors?

Now is not the time to fight the opposition. There is no harm in seeking a political solution to the impasse. Far from being seen as foolish, Mutharika would gain lots of respect if he were to seek out his opponents and have dialogue with them as to how they as political leaders can heal this nation.

Now that is a last stand that future historians would enjoy to write about.

Z. Allan Ntatahttp://doctorzax.blogspot.com/
Z Allan Ntata is a Barrister of Middle Temple, Anti-Corruption & Governance specialist and author of Trappings of Power: Political Leadership in Africa. Currently an Independent consultant in Governance and Anti-corruption, Ntata has a diverse background from lecturing in law to acting as legal counsel to the president of Malawi.
RELATED ARTICLES
Environment